Carolyn Poirier: Getting young people involved in the fight against Alzheimer’s

After Carolyn Poirier found out her mother had been diagnosed with Alzheimer's disease, the Laurier alumna took action

When Carolyn Poirier (BBA ’10) was in her second year at Laurier, her mother was diagnosed with Alzheimer’s Disease. A few years later, she joined with some friends (including fellow Laurier alumni) to form Young People Against Alzheimer’s, which has raised $196,000 for the Alzheimer Society of Toronto over the past four years.

The organization, which is now known as the Young Leaders Council of the  Alzheimer Society of Toronto, raises money and awareness through a series of events and initiatives including Memory Ball, an annual gala fundraiser in Toronto. 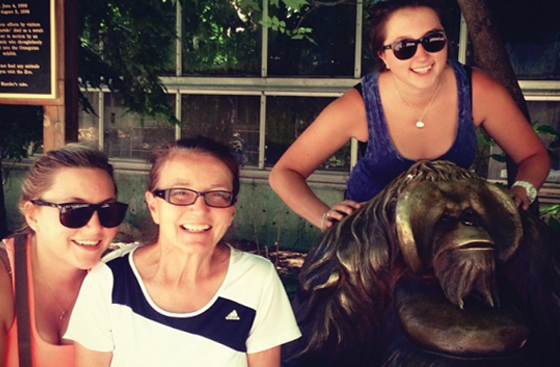 L-R: Carolyn, Jane and Claire at the Toronto Zoo.

How did the organization come together?

After leaving Laurier in the summer of 2010, I was lucky enough to jump into full-time employment at one of the big-five banks in downtown Toronto. It was rewarding and challenging, but I found the path I was on to be less fulfilling than I imagined.

Having a family connection to the disease, I, along with three other Laurier BBAs (Cristina Costa, Megan Shaw, Lauren Hopkinson) and two friends from Western (Katherine Andrikopoulos and Kathryn Fudurich) joined together to use some of our free time to do something important. We were determined to put together a charity event, like the dozens we’d participated in throughout university, to do something positive in the face of a disease we all had close ties to.

Our first Memory Ball in March of 2012 was a great success, raising $23,000. We met with the Alzheimer’s Society of Toronto and we started to see the direct correlation between the dollars we raised and the people they helped. From that point on, we have all been hooked on fundraising!

What kind of work does the organization do?

We aim to increase awareness and generate funds for an extremely under-followed and misunderstood terminal illness. Alzheimer’s affects 750,000 Canadians, which further affects millions through family caregivers and puts constant strain on the health care system. The cost is estimated to be $33 billion per year in Canada.

Since 2011, we have raised funds and awareness through five flagship events as well as numerous other initiatives and smaller scale events. We have introduced thousands of young people to the ramifications of this disease in their lives and to society as a whole.

Why is this cause so close to your heart?

During my second year at Laurier, my family received some unexpected and heartbreaking news: my mum, who was in her early 50s, had been diagnosed with Alzheimer’s. I was 19 at the time and my sister was 14. We had lost our paternal grandfather to the disease a few years prior, and really had no idea it could happen to someone so young.

At the time of diagnosis, my mum, Jane Holland, was running a successful PR firm in Toronto with dozens of clients internationally. The first few years of the disease were confusing and bleak as we learned there was very little we could do.

Through my work with Memory Ball and the Alzheimer’s Society, I feel like I can make a difference even though this disease is always terminal. At this stage there is not much we can do for my mum — she now needs around-the-clock care and a wheelchair. I know she would have wanted us to use our energy toward making this better for other families in the future, and perhaps one day the diagnosis won’t be terminal.

What are some common misconceptions about Alzheimer’s you’d like to clear up?

That it only affects the elderly. There are a growing number of cases of people in their 40s, 50s and 60s with Alzheimer’s. In many cases these people are in their prime years, with young families and careers. It also is much more than forgetfulness, this disease robs the individual entirely.

It takes away your ability to take care of yourself. It forces children to introduce themselves to their parents time and time again. In the end it robs the body of basic functioning, and is completely incurable and irreversible.

As someone who’s gone through it with your mother, what advice do you have for people who have a loved one suffering from Alzheimer’s?

Find a great support group, I’ve been lucky enough to have great friends and family to help me through this. Most people won’t fully understand, but finding someone who knows the right questions to ask, or who won’t get too upset if you have to miss a coffee date because your mum can’t be alone, is critical.

On top of that, I’d say get involved in a positive outlet; that’s what Memory Ball is for me, it can be extremely therapeutic. When confronting terminal illness in your family, you may feel like their isn’t much you can do for your loved one now, but that doesn’t mean their won’t be something good that comes out of the research that happens now.

What are some of the Memory Ball team’s accomplishments you’re most proud of?

There are too many too count! Watching the team grow and seeing more people aware of what this disease means to our generation are probably the things that give me the most pride.

Take us back to the first Memory Ball. What was it like planning the event for the first time?

I’d been involved with XLERATE through my university career, putting on a few events in the business school. I had also been working on large scale events at my first Bay Street job. The founding team all came from similar backgrounds whether it was events or clubs at university or finding themselves doing project or event management in their careers. 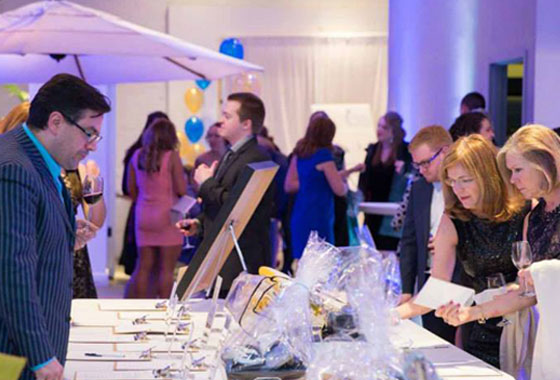 Attendees of the Memory Ball take part in a silent auction. Photo courtesy of memoryball.org.

That said, it’s completely different starting something with your own money and no security blanket of a corporation or school if something should go wrong. We were on the line for costs if we didn’t sell all our tickets. We had to source every auction item, we had to reach out to every media outlet and hope that they would take us seriously. It was a big undertaking and I really can’t stress enough how great of a team we have.

What are your goals for the future of Memory Ball?

We’d like to grow our fundraising commitments; our goal for this year is to hit $250,000 since 2011. From there, I’d like to continue to grow awareness for this disease and brain health in our community. As the first Young Patrons Council of any of the Alzheimer Society’s across Canada, I’d also like to replicate our event and mission in as many other chapters as possible across the country.

But my real dream would be for this event and the Alzheimer Society to be unnecessary, because a cure has been developed.

What do you remember most about your time at Laurier?

The amazing people I had class with, lived beside, worked with and taught me. It’s a great school filled with driven, fun loving people. I miss having everyone and everything so close! I definitely miss Wilf’s, and the three-minute walk home after, which I found a way to complain about – I guess you live, you learn!

How has your Laurier degree helped you get to where you are today?

In countless ways, the case-oriented nature of the business program is extremely relevant in the working world. The network of classmates and alumni working in Toronto is extremely valuable as well. My career and Memory Ball wouldn’t be where they are today without the network. Our first Memory Ball was almost 75 per cent recent Laurier grads.

What does it mean to you to be doing this work with your closest friends?

It’s fantastic, I have scheduled hangouts with 20 people who I love and respect. These are some of the hardest working people you’ll meet who come from varying careers, schools, networks. They all bring some much to the table, and are a source of constant laughs.

It’s great to have over half the team be Laurier grads, I mean, we get a little off-topic and find ourselves discussing the benefits of Campus Pizza versus Pizza Pizza, but hey, these things happen.