Brantford YMCA moves into next phase 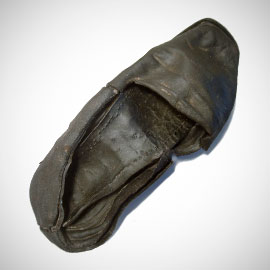 The shoe is amazingly intact, especially given its age.

Buried for likely one hundred or more years, this relic belies the craftsmanship of its original maker. Was it a sample from the Agnew shoe company that started in Brantford in 1879 and went on to become a national chain of 104 stores, or perhaps the handiwork of William Dutton, one of the city’s earliest cobblers who set up shop on Colborne Street in 1822? That is still being determined.

Either way, this simple pegged shoe tells part of the story of Brantford’s people and its past, a story that can now be told with new insight.

The shoe is but one of nearly 400,000 artifacts unearthed at the site on Colborne Street in Brantford that will become the future home of the new health, fitness and aquatics complex being built through a partnership between the governments of Canada and Ontario, Wilfrid Laurier University and the YMCA. Archeological discovery work at the site was completed at the end of 2015.

Archeologists are now working through the trove, cataloging and photographing each item, and researching their origins.

“The sheer volume of archeological material unearthed at the site did add to our project timelines,” said Brian Rosborough, senior executive officer at Laurier’s Brantford campus. “However, the discoveries made at the site are exciting, and add a new and important dimension to this project. They tell the story of the people who have called this area home from as far back as 500 BCE to the 21st century. Our archeologists have referred to this as the most significant archeological discovery in Ontario since the construction of the SkyDome (Rogers Centre). As a university, we’re thrilled to be part of such compelling finds.”

"They tell the story of the people who have called this area home from as far back as 500 BCE to the 21st century."

Among the items unearthed at the site are several coins including one featuring Sir Isaac Brock, and an Upper Canada sloop penny from the 1820s; pottery shards from the Late Woodland peoples; and relics from the early European settlers, including a pipe bearing an effigy of Punch from the popular Punch and Judy puppet shows, and tableware, including a delicate Davenport teacup. With archaeological work complete, construction on the facility is set to begin.

Located on the south side of Colborne Street, between Grand River Hall and the municipal parking walkway, opposite Harmony Square, the facility will include an aquatic centre; multi-purpose spaces; cardio, strength and weight areas; and a large gymnasium and multi-purpose studios.