Jacky Normandeau, a third-year student who plays on Laurier’s women’s soccer and women’s hockey teams, was named the 2016 recipient of the Outstanding Women of Laurier Award.

Launched in 2006, the annual award recognizes a female student athlete who excels in the classroom and the community, as well as on the field of play. This year’s OWL event featured a keynote address from Jennifer Jones, a 2014 Olympic gold medalist in curling.

As a stalwart defender on both the ice and the field, Normandeau has been a stabilizing presence for Laurier’s women’s soccer and hockey teams, winning OUA championships with both squads in 2013-14 as well as being named a provincial all-star in soccer in 2015.

A rare dual-sport athlete, Normandeau is also a two-time Academic All-Canadian and is heavily involved in the community, participating in hospital visits and volunteering for the Running and Reading program with the Laurier Lettermen Club, as well as coaching at a girl’s hockey camp during the summer months. Normandeau was one of three nominees for this year’s award, joining women’s soccer teammate Suzanne Boroumand and women’s curler Evie Fortier. 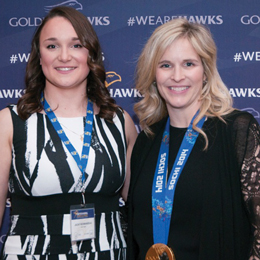