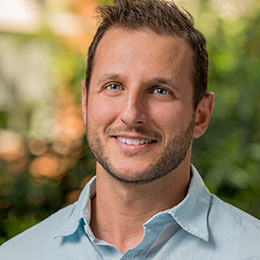 “I have found a disease that no one has ever seen.”

The proclamation by Dr. Bennet Omalu, played by Will Smith in the 2015 Hollywood blockbuster Concussion, is one that resonates with Michael Cinelli, an associate professor in Laurier’s Department of Kinesiology and Physical Education. A leading concussion researcher, Cinelli aims to understand the relationship between visual perception and physical output in concussed adults. Working closely with Laurier’s athletic teams and athletic therapists, Cinelli tests and assesses the concussed athlete’s perception-output relationship, determining if they have properly recovered.

“Concussed individuals need to be properly assessed, and managed, for nerve function to recover,” said Cinelli. “Without this, long-term damage can occur.”

Long-term damage is exactly what the real-life Omalu found during the autopsy of Mike Webster, the famed Pittsburgh Steelers offensive lineman. Webster died at the age of 50, suffering from dementia, bouts of rage, confusion and substance abuse during his post-football years.Omalu found extreme damage to Webster’s brain, something now known as Chronic Traumatic Encephalopathy.

“Those who are recently concussed often lack the judgment skills to determine if they are ready to return to play,” said Cinelli. “Some major league athletes may have waived their right to medical care, returning to play before fully recovering.”

Many Canadians are sadly familiar with the story of Rowan Stringer, a 17 year-old rugby player from Ottawa who died as a result of Second Impact Syndrome, the onset of a second concussion before the initial trauma heals. Stringer, eager to return to play, suffered two concussions in one week in May 2013. Cinelli wonders if better concussion education could have prevented Stringer from returning to play, avoiding the second, fatal injury.

“Educating athletes is a good start, but it is not enough,” said Cinelli. “We need to have other measures in place, like trained personnel at sporting events to ensure young athletes are properly diagnosed and managed.”

Rowan’s Law, a set of recommendations resulting from the inquest into the teen’s death, has been put forward to policy-makers. If passed, the law would require protocols such as medical clearance of concussed athletes before they can return to play, mandatory concussion educations for players, parents, and coaches, and the immediate removal of a young athlete from the game if a concussion is suspected. Several American states have concussion-related legislation, but Canada has no such procedures in place. Continuing to raise awareness about concussions, and the severity of their risks, is a crucial step in the management and treatment of such brain injuries.

Cinelli and a team of student volunteers have taken their message public through Team Up Laurier, a local branch of an American-based education initiative offering concussion education to local elementary and secondary schools. Cinelli also coordinated the third annual Team Up Laurier Concussion Education Symposium on the Waterloo campus in March, which featured a keynote address from former Kitchener Rangers hockey player Ben Fanelli. Fanelli suffered severe head injuries in his rookie season with the Rangers in 2009 after taking a violent hit. He returned to the team in the 2011-12 season and founded the Head Strong foundation to raise funds and awareness for the Brain Injury Association of Canada.

While athletes in contact sports are at a greater risk of experiencing a concussion, it is a serious medical condition that can affect anyone. A fall down the stairs, a motor vehicle accident, or an intense jarring of the head can all cause concussions. Symptoms range from dizziness and confusion, to headaches and forgetfulness, but evidence of a concussion can also be delayed, complicating the treatment and recovery process. For those who think they may be concussed, or suspect a concussion in someone else, Cinelli suggests seeking the care of a medical professional as soon as possible.

He also stresses the importance of communicating new or changing symptoms to a medical professional. The absence of symptoms, he cautions, does not always indicate recovery.