Nathan Mesher kicked the game-winning field goal with no time left on the clock to cap the largest fourth-quarter comeback in Yates Cup history as the Laurier Golden Hawks defeated the Western Mustangs 43-40 at TD Stadium in London on Nov. 12.

Trailing 40-19 early in the fourth quarter, quarterback Michael Knevel of Brantford led the Hawks on three consecutive touchdown drives before Mesher, a native of Waterloo, connected from 26 yards to give Laurier its eighth Ontario football title in school history.

“I am probably the only one crazy enough to think it could actually happen,” head coach Michael Faulds said following the game. “I told the players that and they gave me a nod. But I truly did believe.”

With the win, Laurier advanced to the Uteck Bowl in Quebec City on Nov. 19, where the Golden Hawks faced the powerhouse Laval Rouge et Or for the chance at a Vanier Cup berth. But an appearance in the national university football championship wasn't to be this year, as Laurier fell to Laval 36-6. 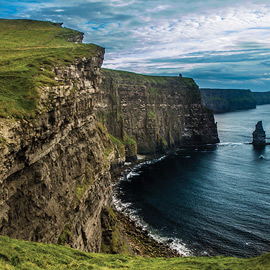 Make 2017 the year you take the trip of a lifetime. Discover the incredible line-up.