As I head to an event hosted by Swiss expats in the heart of the Thai capital, Bangkok, I find myself reflecting upon how grateful I am to finally have found home — 12 time zones away from where I was raised. This journey began during my time at Laurier, when the United Nations invited me to intern in its Bangkok office.

Unbeknownst to me at the time, Thailand is home to the UN’s Asia-Pacific regional headquarters. I had never dreamed of living in this part of the world, but my opportunity with the UN allowed me to fall in love with the culture and people of the beautiful country of Thailand.

Metro Bangkok is home to some 14.5 million people. The average Thai person has a basic grasp of the English language, permitting positive interactions to occur between locals and newcomers. 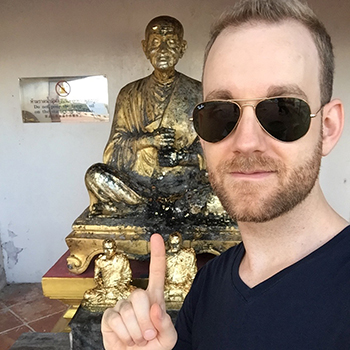 Bangkok mixes the best of the modern world and the developing world in one sprawling cityscape, featuring contemporary amenities alongside the charm only to be found in rural communities. From hospitals on par with anything I have experienced in Western countries (minus the ubiquitous queues), to how young entrepreneurs face few start-up barriers (how many thirty-somethings could afford an office in a trendy neighbourhood and 10 dedicated staff without parental support in Canada?), to world-class public transit alongside charming “water buses,” I am consistently and pleasantly surprised by how well one can live here.

Taking a step back, I think several factors enabled me to make the cultural shift required to work abroad.

First, growing up in a multicultural society makes it relatively easy for a Canadian to fit in overseas. Whereas most nations define identity based on ethnicity, we celebrate our diversity and rub shoulders with people from around the globe. Second, having travelled from an early age — to Switzerland, among other countries — helps in the sense that I don’t experience the culture shock that may plague those accustomed to a singular way of life. Third, I always do my best to keep an open mind and try to not impose my beliefs on others (trying as this may be while living in a country governed by an unelected leader). Showing appreciation and respect for local customs and values goes a long way toward fitting in.

Fast forward to the present. I now manage a company that I co-founded. My agency, Paper & Page, recently landed a contract with the American government and works across Southeast Asia.

The master’s degree I earned at Laurier goes a long way toward supporting my success, as citizens of developing countries covet Canadian academic credentials.

Having lived here for two years, I am not yet ready to leave. While I do miss certain things about Canada, such as the changing of the seasons, clean air, general rule of law and especially family, there is opportunity in this region right now. I would recommend anyone looking for the adventure of a lifetime make the move.

Interested in sharing your story about living abroad? Email us at campusmagazine@wlu.ca.