Laurier in the North

As the helicopter from Inuvik flew north to Laurier’s Trail Valley Creek Research Station, Dilshan Kariyawasam thought he saw people in the distance. As he got closer, the Laurier geography and environmental studies student realized the vertical shapes were just sporadic small trees that dot the tundra landscape. It brought home to him how isolated he would be for the next seven weeks. 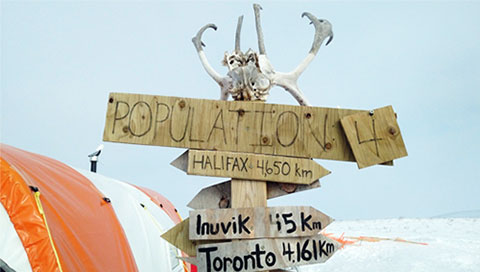 At first, though it was early May, it was cold. Snow covered the ground. Until his Arctic-grade sleeping bag warmed up, it was freezing at bedtime — despite the 20 hours of daylight that filtered through the orange fabric of his small tent.

As the days grew even longer, the snow melted, which exposed clumps of soil and vegetation that made walking even short distances treacherous and tiring. There was heavy equipment to lug around, sometimes in cold and rainy weather. There were only a few people to spend time with. Being a field assistant at Trail Valley was the hardest thing Kariyawasam had done in his life.

And he loved it. He’s now considering applying for a master’s degree focused on Arctic hydrology.

“In the summer, there are lots of sounds of wildlife, especially birds migrating through the area,” Kariyawasam says. “The tundra smells nice. The air feels clean. Everyone in camp is very nice and really cheery. It was an amazing experience.”

A focus on the North

Kariyawasam is just one of many Laurier researchers working in northern Canada. They investigate topics including climate change, hydrology, caribou migration, northern food security and greenhouse gases, just to name a few.

“There is a growing capacity of exceptional northern-focused researchers at Laurier, which is driving collaboration throughout our university and with partner institutions, which include governments, Indigenous communities, NGOs and other academic institutions across Canada and around the world,” says Rob Gordon, Laurier’s vice-president: research and acting provost. “Laurier is already a national and international leader in cold regions research, but as we expand our capacity in this area, we are increasingly solving real-world problems and providing policy recommendations that will shape how our world responds to the major changes occurring in northern Canada.”

A new Laurier research office in Yellowknife, which had its grand opening in September, will help the university deepen its relationships with partners and facilitate year-round fieldwork. Northwest Territories Deputy Minister of the Environment and Natural Resources Joseph Dragon, Chief Edward Sangris of the Yellowknives Dene First Nation and Yellowknife Mayor Mark Heyck attended the opening, along with Laurier leaders including President Deborah MacLatchy.

Fieldwork remains the cornerstone of Laurier’s northern research, as Kariyawasam learned. His work this summer focused on understanding snow, streams and lakes, and included measuring snow depth and stream flow, as well as mapping lake depth using sonar. Some of the field data he collected was for his own honours thesis and some was for graduate student Evan Wilcox, who he was assisting.

Now back in Waterloo, Kariyawasam is working on his thesis under the supervision of Professor Philip Marsh, a Canada Research Chair and principal investigator with the Changing Arctic Network, which focuses on climate change impacts on snow and hydrology. However, he hasn’t forgotten what it’s like to collect reliable field data in the Arctic.

“Now I know how much work goes into actually retrieving every single data point,” he says.

Associate Professor William Quinton has been conducting fieldwork in the North since 1987. Quinton is director of Laurier’s Cold Regions Research Centre, director of the Scotty Creek Research Station and principal investigator of the Consortium for Permafrost Ecosystems in Transition project.

One of Quinton’s foremost interests is permafrost thaw. He has worked for nearly two decades at Scotty Creek, south of Fort Simpson, Northwest Territories, where permafrost is discontinuous, or patchy.

Using a 200-kilometre corridor stretching south from Scotty Creek as a proxy for warming, he and his colleagues are trying to understand how permafrost has changed over the years and predict what will happen in the future.

“It looks like there might be a couple of stages of change,” Quinton says. “The first might be that the land cover gets wetter. Forests are replaced by wetlands as the permafrost thaws and the land above it sinks. But at some point, after the permafrost has disappeared, the wetlands will drain. Then trees will come back.”

Observations along Quinton’s research corridor suggest there will be significant changes to ecology and hydrology. Southern species will expand their range north, the water storage capacity of wetlands will be compromised and stream flows will change. Ways of life will be affected as hunting grounds become boggy and infrastructure needs change.

Looking at the bigger picture, permafrost thaw could exacerbate the effects of climate change, Quinton says.

“If you dry out the landscape, it heats up more readily and there’s more convective action in the weather systems, which could mean more storms.”

Quinton isn’t just observing and predicting — he’s working on solutions. He’s researching areas where past seismic exploration has cut lines through the trees, exposing the ground and thawing the permafrost below. The result has been underground streams of water flowing between bodies of permafrost.

The idea Quinton is exploring with colleagues, notably his former graduate student Michael Braverman, is low-tech and therefore relatively affordable. A thermosiphon is essentially a tube sticking up above the snow and plunging deep into the ground. In Quinton and Braverman’s design, a submersible pump forces the circulation of a coolant. In winter, it helps cold air sink into areas of thawed permafrost.

“Our tests at Scotty Creek show that these new thermosiphons regenerate permafrost pretty quickly,” says Quinton, who is working with the Northwest Territories government to apply the same solution to thawing below highways.

Ana Sniderhan is the ecosystem resilience research associate for the Northern Water Futures project, part of the Global Water Futures research program led by four universities including Laurier. For her nearly finished PhD in geography, she focused on black spruce, one of the few trees that grow well above permafrost. Permafrost thaw is having major effects on northern black spruce forests.

Black spruce thrive across almost all of Canada. Under the supervision of Associate Professor Jennifer Baltzer, Canada Research Chair in Forests and Global Change, Sniderhan concentrated on three very different sites: the permafrost-free southern boreal forest near Prince Albert, Saskatchewan; the northern boreal forest at Scotty Creek, where permafrost is patchy; and Trail Valley, 50 kilometres north of Inuvik, near the northern limit of the tree’s range, where permafrost is continuous.

A major part of Sniderhan’s research consisted of examining tree core samples. Each tree ring contains information about how that tree lived and grew as far back as 200 years ago. In samples from the Scotty Creek area in particular, she found signs of stress in recent years. That’s because even where permafrost continues to exist, it’s moving deeper, with the unfrozen top layer of soil becoming thicker.

“Despite seeing more wetlands across this landscape, there are a lot of instances where the trees are actually suffering from drought stress because they have very shallow rooting systems,” Sniderhan says. “As the water table lowers with permafrost thaw, they’re just not able to access those water resources.”

Black spruce grow differently in different places. In Saskatchewan, the trees grow fast but young needles are vulnerable if an early frost occurs. Near Inuvik, by contrast, the trees grow only a little during the short summer before hardening their needles for the coming winter. Sniderhan wanted to see if these differences were genetic or occurred in response to different environments.

Sniderhan took seeds from her far-flung sites and grew them together in growth chambers at Laurier’s Centre for Cold Regions and Water Science. The conclusion? Most of the differences in growth patterns are hard-wired in the trees’ genes, which is bad for young trees’ ability to adapt quickly to a changing climate.

It’s not all bad news, though. Adult trees from the Inuvik region are showing increases in annual growth in response to warming conditions, which means that “for future survival, black spruce isn’t facing complete and utter doom just because the seedlings don’t seem to exhibit much plasticity in their traits,” Sniderhan says.

Nor is it just trees that can grow in the isolation of Canada’s North. Also growing is Laurier’s reputation as a research leader when it comes to the environmental impacts of climate change. And as Kariyawasam found, he grew as well — both as a researcher and as a person.

“It definitely changed me,” he says of his experience in the North. “I feel like I can do anything now.” 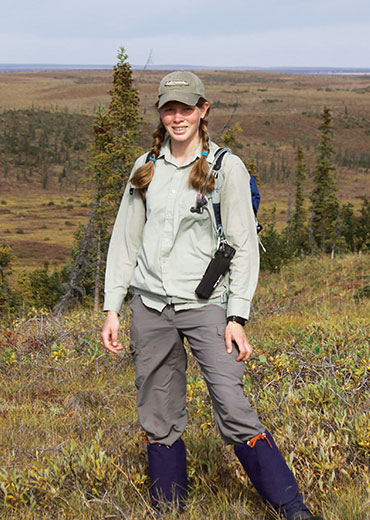 You can be the catalyst for research into the global implications of a changing climate by supporting the groundbreaking research efforts of Laurier students in the Northwest Territories.

Your gift will ensure that students and faculty have the space and equipment they need to continue their important work. With your support, we can build on Laurier’s reputation as a global leader in cold regions environmental research.