Preparing for pro – and beyond

Shamawd Chambers had big plans when he arrived at Laurier for his first year of university.

“I wanted to play pro football from the first day I stepped on campus,” says the Hamilton Tiger-Cats receiver, who has played for three Canadian Football League (CFL) teams during his six-year career and was the top Canadian in the 2015 Grey Cup game.

Chambers played four seasons with the Golden Hawks before the Edmonton Eskimos drafted him sixth overall in 2012. He says he achieved his goal thanks to a combination of athletic ability and the life skills he learned at Laurier.

“Being a student athlete is like having two full-time jobs,” says Chambers, who studied religion and culture. “Being at Laurier made adapting to and preparing for pro football a lot easier.” 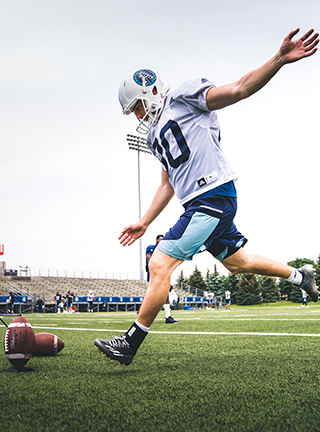 Helping student athletes succeed in sport and in life is a hallmark of the Laurier athletic experience.

“It’s part of the culture here,” says Peter Baxter, director of Athletics and Recreation. “The Laurier program is the result of a long line of people who have tried to develop young people who are engaged, compassionate, empathetic and want to serve others.”

It’s also the result of intentional programming that’s designed to show student athletes that there are steps required to achieve their goals, both in sports and life.

Take the Athlete Academic Success program, for example. Launched in 2007, the initiative — which includes mandatory study halls led by senior student athletes who are known as “athlete academic coaches” — helps younger student athletes learn time-management strategies and how to build structure into their lives.

The program has helped push the graduation rate for student athletes at Laurier to 95 per cent. That compares to 89 per cent for the general student population, according to a study by recently retired kinesiology and physical education Professor Bill McTeer.

For football players, structure is key to the success they enjoy at Laurier, in the CFL and later in life.

“I’m a structured person because of Laurier and it has made for an easier transition into pro football, because in pro you spend hours and hours, for instance, watching film,” says former Golden Hawk Chris Ackie, a first-round 2015 draft pick who earned a starting safety position with the Montreal Alouettes this season before being sidelined with a triceps tendon tear.

“It’s less about the physical than the mental preparation,” says Ackie, who plans to parlay his Laurier communications degree into a career in sports marketing after he hangs up his cleats.  “For me, the film work now, the way things are broken down, all scenarios, is like the academic part at Laurier — balancing it all.”

Developing such skills is a priority continually emphasized at Laurier.

“I put it like this to recruits,” says Dwayne Cameron, Golden Hawks special teams coordinator, recruiting coordinator and defensive backs coach. “At some point in time, you will likely become someone’s husband, likely someone’s father, and there’s responsibilities that go with that. Even if you do make it to the CFL, you have to be able to transition into life.

“For a lot of guys, because of the passion they have for it, football comes naturally. But that’s not always applicable in other aspects of their lives. I learned this in my own life through mistakes I made. Just things like, be true to your word, dress appropriately, be punctual, address people with respect. It’s about being structured and if you look at the people in leadership positions here, like head coach Michael Faulds, the rest of the staff, myself, we’re all very structured people. And we demand that of our players.”

Cameron, drafted in 1996 by the Hamilton Tiger-Cats after playing college in Kansas and Louisiana, is often credited by Laurier alumni in the CFL for playing a key counselling role, one that doesn’t end when a student athlete leaves Laurier.

“Whenever I need some advice, if it’s not my parents, it’s the coaches I contact,” says Golden Hawk alumnus Ronnie Pfeffer, a kicker with the Toronto Argonauts who won a Grey Cup with the Ottawa Redblacks in 2016. “This isn’t a program where you spend four years and you’re done.”

Such comments are gratifying to Baxter and his colleagues in Laurier’s athletics program.

“If you look at anything in leadership, business, the more you give, the more you get,” says Baxter. “We emphasize that and invest in it, because it’s what will carry student athletes through. But they will always look to the coaches, and it’s an ongoing process where the coaches are constantly helping these guys in terms of transitioning to pro, getting ready for the draft… But they’ll also tell them straight, you better get your degree. That’s the messaging.”

Kevin McDonald heard that message loud and clear. He graduated with a degree in physical education — and he stayed in the game. A Laurier quarterback during the early 1990s, McDonald forged a different path and is now vice-president, football operations and player safety for the CFL.

“I knew playing pro football wasn’t an option for me,” says McDonald, a second-team Ontario all-star in 1996. So he took up coaching at Queen’s and Mount Allison universities, eventually playing professionally for one season in Austria before returning home. Contacts gained through his football travels, including a volunteer stint with the Vanier Cup organizing committee, led him to a job in the CFL in 2001. He was promoted to his current role in early 2016.

McDonald, who was also a residence don and a bartender in the campus pub, looks back fondly on his days at Laurier.

“Overall, it was an amazing team and community environment,” he says. “It was just a great experience and, even though the school has grown by leaps and bounds since the early ’90s, they’re sticking true to what Laurier is. They’ve been able to integrate that community feeling into a place that’s very comfortable to be.”

For the football program, the comfort zone was created during the mid-to-late 1960s when a band of four West Virginia “brothers” joined what was then known as Waterloo Lutheran University, intent on adding football glory to the school’s heritage. Former Golden Hawk football coaches Dave (Tuffy) Knight and Rich Newbrough, as well as administrators Don Smith and Fred Nichols, built a program that, but for the occasional blip, became and remains a national power.

Glassford, chair of Laurier’s football legacy fund committee and a Golden Hawk Hall of Fame member, was named defensive player of the game as a linebacker for the Ottawa Rough Riders in the team’s 26-23 Grey Cup loss to overwhelming favourite Edmonton in 1981.

“My dad was a huge influence on me,” says Glassford, a member of the Golden Hawks Team of the Century who took over his father Jack’s Ingersoll car dealership in 1997. “But it’s also people like Tuffy, Fred, Rich, Don Smith, and the approach they had about developing people that had a big impact. I enjoy their company and friendship to this day.”

That type of connection continues to attract football recruits to Laurier.

“What Laurier provided me was someplace I felt comfortable as a human being,” says Kwaku Boateng, now a rookie defensive end with Edmonton after all-Canadian campaigns during his time at Laurier. “Just the way people carry themselves, people like coach Cameron, there was just a sense of home and family.”

Boateng, who studied business and accounting at Laurier, was a two-time academic all-Canadian, a perfect fit for serving as an academic coach in the Athlete Academic Success program.

“It’s a blessing and a curse being a student athlete,” Boateng says. “Time management is so crucial. The people that do end up staying are the ones with the time-management skills. It’s actually harder in the off-season because you have more free time and less structure. The busier you are, the better, and at Laurier I was forced to maintain a disciplined approach.”

It’s an approach that emphasizes structure, self-discipline and community — a well-executed play that continues to nurture the success of Laurier student athletes both on and off the field.

RELATED STORIES
Laurier football: ‘Win every day, in everything we do'
Features | Winter 2017