A distinguished scientist and academic leader who has long been a champion of Laurier’s values, vision and mission has been appointed the university’s next president and vice-chancellor.

Deborah MacLatchy, who most recently served as Laurier’s provost and vice-president: academic, will begin her term July 1.

“Dr. MacLatchy is an accomplished scientist with outstanding administrative experience,” says John Bowey, chair of Laurier’s Board of Governors. “Her passion for Laurier and her deep understanding of the post-secondary environment in Ontario and Canada will provide the university with vision, exceptional leadership and valuable continuity.”

When MacLatchy first joined Laurier as dean of science in 2007, she spoke of the university’s vibrant community and commitment to academic excellence.

She will continue to focus on those distinguishing elements.

“I am privileged and honoured to be entrusted with this exciting role,” MacLatchy says. “Laurier is a remarkable university and I look forward to working with all of our students, faculty, staff, alumni, partners, donors and friends as we continue to build on the university’s terrific reputation for teaching, research, community outreach, student experience, graduate programming and inclusivity.” 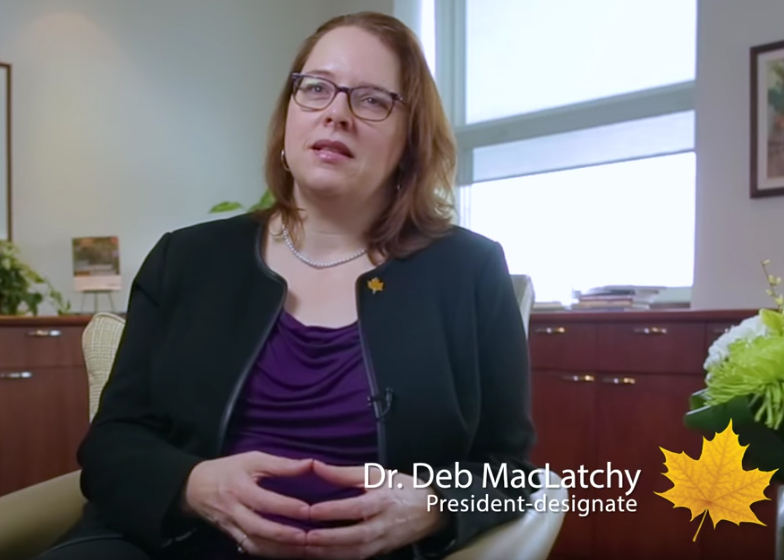 MacLatchy served in the role of vice-president: academic and provost since 2009. She also served as acting vice-president: research from December 2014 to November 2015. During her time in those roles, she worked closely with outgoing university President and Vice-Chancellor Max Blouw, who will complete his second five-year term at the end of June 2017.

During Blouw’s two terms as president, Laurier has gone through significant growth in infrastructure and academic programming on the university’s Waterloo and Brantford campuses, as well as locations in Kitchener and Toronto. Blouw has championed major initiatives, including a partnership with the Town of Milton to explore a campus in the growing community, and the construction of a new athletics and recreation facility in downtown Brantford.

“Long before the provincial government realized that differentiation was critical to the sector, Max recognized that Laurier’s distinguishing strengths were as a multi-campus, comprehensive and student-focused university,” MacLatchy says. “This vision will serve us very well in the years to come.”

During her time at Laurier, MacLatchy has played a lead role in many significant initiatives. They include a new strategic academic plan, the establishment of innovative undergraduate and graduate degrees, the development of Laurier’s integrated and engaged learning model, the development of a multi-campus governance framework and the launch of the Laurier Institute for Water Science, among many other initiatives.

“Laurier’s excellence as a student-focused, comprehensive university with its strong arts, science and professional programs will be the foundation on which we will build going forward,” MacLatchy says. “I hope we will be able to increasingly prioritize broad community engagement in our programs and research, including welcoming diverse communities into Laurier.”

MacLatchy will become Laurier’s seventh president and vice-chancellor since the university became a public institution in 1973.