Donors to Laurier’s Building Canada’s Best Business School campaign have been recognized as part of a new interactive recognition wall in Lazaridis Hall.

Laurier unveiled the innovative fixture during a recent celebration event.

Students and visitors can use touch-screen tiles on the five-pillared wall to learn about campaign donors and their contributions. The tiles feature donor profiles, a timeline of the Lazaridis School of Business and Economics and a list of the nearly 2,500 donors who have supported the campaign so far. The new donor wall features Christie MicroTiles technology. The tiles were invented and created by Christie, a Kitchener-based global audio and visual technology leader, and part of a $1-million donation from the company to the university.

“Christie is supporting the Lazaridis School because of our strong belief in its mission and to foster the next wave of highly skilled business leaders in this community and in Canada,” said Ihor Stech, Christie’s chief operating officer.
Forge Media, a Toronto-based company and donor to the Building Canada’s Best Business School campaign, developed the design and programming for the wall and its display.

“We are extremely grateful to Christie for donating this outstanding addition to Lazaridis Hall,” said Max Blouw, Laurier’s president and vice-chancellor. “The university’s collaboration with Christie and Forge Media is an example of the dynamic public-private partnerships Laurier has with many corporations and individuals who support our university and our students.” 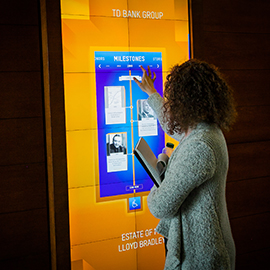