Laurier to present vision for campus to provincial government

The Ontario government recently announced that Laurier’s proposal for establishing a post-secondary site in the Town of Milton was the only submission it received for this location under the province’s Request for Expressions of Interest (REOI) for expanding access to post-secondary education.

Laurier will have an opportunity to present its vision to the government, which will then evaluate it for alignment with provincial objectives.

Earlier this year, the Ontario government issued guidelines for an REOI for the expansion of post-secondary education in both Milton and Brampton. Laurier filed its submission by the March 6 deadline. The province plans to evaluate the submissions and invite institutions to further develop their proposals through an invitational call for proposals starting in May.  Discussions will ensue over the course of the summer with final decisions on the expansion process planned for fall 2017.

Laurier has been working with the Town of Milton since 2008 to explore the possibility of establishing a post-secondary site in the fast-growing community, which is located on the west side of the GTA.

Earlier this year, Laurier’s board of governors approved two motions that further support the endeavour.

The first motion authorized the university to submit a proposal to the province in response to the government’s REOI process.

The second motion approved a one-year extension to the university’s memorandum of understanding with the Town of Milton. The MOU, originally signed in 2008 with two subsequent renewals, confirms the partnership between the town and Laurier to explore the expansion of Laurier into Milton.

At Laurier, the approval of academic programming is the responsibility of the university senate. As part of the REOI process, senate will be asked to endorse, in principle, the direction of the academic plan for Milton, with approval of programs occurring at a later date as part of senate’s regularly approved processes.

As discussions between Laurier and the province proceed, the university will keep its governing bodies apprised at key decision points. 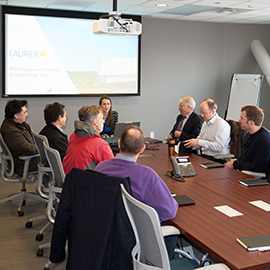