While the decline of mainline Protestant denominations is common knowledge, why they are dying has been the subject of much debate.

A study led by Laurier researcher David Haskell reveals the traits that help some congregations thrive while others whither — and the results are not what many may expect. Conservative religious doctrine, according to Haskell and his co-researchers, is a key driver for church growth in mainline Protestant congregations. According to their studies, liberal doctrine in fact leads to decline. 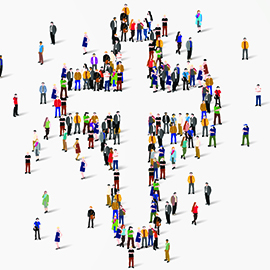 In the U.K., the Anglican Church, or Church of England, is the largest mainline denomination. Attendees to their Sunday services have dropped below one million for the first time. Canada’s four mainline denominations — Anglican, Presbyterian, Lutheran and United — have lost more than half their members since the 1960s, while the population of the country has nearly doubled.

In the United States, the largest mainline churches – the United Methodist Church, Evangelical Lutheran Church in America, Presbyterian Church (U.S.A.) and Episcopal Church — have declined at a faster rate than any other major Christian group in the country, according to statistics from the Pew Research Centre.

Now, in the first empirical study of its kind, researchers from Laurier and Redeemer University College have offered compelling evidence that conservative theological belief among mainline Protestant clergy and church attendees leads to the growth of a congregation.

The most essential results of the five-year research project appeared in the December issue of the international peer-reviewed journal Review of Religious Research. The article, written by Haskell, who was lead researcher on the study, and co-researchers Kevin Flatt of Redeemer University College and Laurier’s Stephanie Burgoyne, is titled “Theology Matters: Comparing the traits of Growing and Declining Mainline Protestant Church Attendees and Clergy.”

"Our research contradicts several prominent studies that claim theology and church growth are not linked. It is clear they are."

“One of the greatest obstacles to this study was finding mainline Protestant churches that were growing,” Haskell says. “However, once we did, we were able to compare the religious beliefs and practices of the growing church attendees and clergy to those of the declining. For all measures, those from the growing mainline churches held more firmly to the traditional beliefs of Christianity and were more diligent in things like prayer and Bible reading."

According to Haskell, many academics, journalists and mainline Protestant church leaders are convinced that theology has no bearing on church growth. But the study’s authors assert that more specific questions lead to more accurate answers.

“Our research contradicts several prominent studies that claim theology and church growth are not linked. It is clear they are,” Flatt says. “But unlike those other studies which tended to ask just one or two questions of a single key informant — usually the pastor — we surveyed entire congregations and asked many specific questions about religious beliefs and practices.”

More than 2,200 regular mainline Protestant church-goers and clergy from a mix of Anglican, Presbyterian, Lutheran and United churches in the province of Ontario were surveyed. About half were from declining congregations (an annual two per cent loss in attendance during the preceding 10 years) and half from growing congregations (an annual average growth of two per cent or more during the same period).

“Most people, especially academics, are hesitant to say one type of belief system is better than another,” Haskell says. “But if we are talking solely about what belief system is more likely to lead to numerical growth among Protestant churches, the evidence suggests conservative Protestant theology is the clear winner.”

Problem of supply, not demand

Clergy and the congregants of the declining churches believed that pressures and changes in society had caused demand for religion to drop. However, this belief does not explain the growth of some mainline Protestant churches.

“While I would agree that wider cultural changes can impact demand for religion, what our findings suggest is that the supply side of the equation is more important,” Haskell says. “In these cases, in particular, it’s an issue of supply not demand.”