From becoming the first Indigenous person to practice law in the Maritimes to being named New Brunswick's first Indigenous lieutenant governor, Graydon Nicholas (BBA '74, Hon. LLD '02) has led by example.

An accomplished attorney, judge and politician who received his master of social work from Laurier in 1974, Nicholas is Maliseet from the Tobique First Nation in New Brunswick. He is both a member of the Order of Canada and Order of New Brunswick.

Nicholas's post-secondary education began at Nova Scotia's St. Francis Xavier University, where he received his bachelor of science in 1968. He moved on to attend law school at the University of New Brunswick, graduating in 1971 before articling with an East Coast law firm and becoming the first Indigenous person to practice law in the Maritimes. 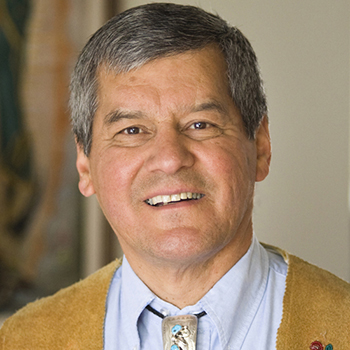 "During that time I found I was representing a lot of people from my own community in criminal court," Nicholas recalls. "I found out that there were a lot of repeat offenders – not serious offences – but a lot of mischievous offences."

"It was quite a thing for me to represent our own people in the province. Part of that I think was acceptance of the judiciary and legal community."

Noticing a pattern, Nicholas began asking himself what could be done to solve problems affecting his community. Soon after, he received a letter.

"It just so happened that Waterloo Lutheran University, today known as Laurier, wrote me a letter saying: 'We would like to begin to recruit Indigenous students into our Master of Social Work program,'" Nicholas recalls.

Nicholas cites work placement opportunities as among the most memorable aspects of his time at Laurier. His first placement was at the Guelph Correctional Centre, where Nicholas worked the evening shift to facilitate after-dinner programming for inmates.

"I was asked to go there because among the population at the Guelph Correctional Centre – between 700 and 800 inmates – about 10 per cent would be Indigenous people from all over Ontario," he says. "It was a significant experience for me because I had an opportunity to get to know these young men very well as Indigenous peoples and my supervisor was very supportive of that experience."

After attending Laurier, Nicholas returned to New Brunswick, accepting a position at the Union of New Brunswick Indians, where he served as chair and eventually president of the organization until 1988. The next year, Nicholas was named chair of native studies at St. Thomas University.

"It was quite a thing for me to represent our own people in the province," Nicholas says. "Part of that I think was acceptance of the judiciary and legal community."

In 2009, Nicholas made history again when he was appointed 30th lieutenant governor of New Brunswick, becoming the first Indigenous person to hold the office. Shortly after concluding his five-year term, Nicholas returned to St. Thomas University, where he was named endowed chair in native studies, a position he currently holds.

Among many other accolades, Nicholas was honoured as one of Laurier's 100 alumni of achievement in 2011 and holds honorary degrees from St. Francis Xavier University, Mount Allison University, the University of New Brunswick and Laurier.