Through her work as a lawyer, Kelly Campagnola (BA '11) is aiming to improve how the justice system works for Indigenous peoples.

An associate at the Toronto office of the multinational law firm Gowling WLG, Campagnola has worked closely with the Métis Nation of Ontario.

Restorative justice is a system of justice that focuses on the rehabilitation of criminal offenders through reconciliation with the victims of crime and the community. 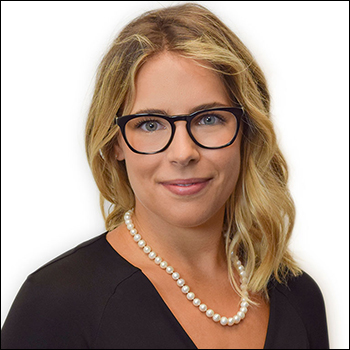 During her time at Gowling, Campagnola has also worked with Jaimie Lickers, a partner at the firm well-known for her work with Indigenous communities on matters including taxation, trusts, self-government and consultation issues. Lickers was recently named national leader of the firm's Indigenous Practice Group.

"It's incredible to help communities advocate for themselves."

"She brings me in on a lot of her files and she's a mentor to me," Campagnola says. "It's incredible to help communities advocate for themselves."

Campagnola received an undergraduate degree in environmental studies from Laurier in 2011 before attending the University of Ottawa for law school. She says her time at Laurier was characterized by positive relationships and experiences, but was also a time of self-discovery and reflection.

During a second-year history course taught by Jody Decker, Campagnola says her eyes were opened to the realities of colonialism.

"The course had a huge impact on me deciding to embrace my Indigenous heritage," she says.

Campagnola's experiences as a Métis person growing up in South Porcupine – a small town near Timmins, Ontario – also fuelled her commitment to work with Indigenous communities.

"Learning in my undergrad about the colonial history of Canada and the reason why Indigenous people tend to trend behind other Canadians, it was so eye-opening," Campagnola says. "It made me realize that I wanted to take up the fight to represent Indigenous communities and help them fight for what they deserve and what was promised in treaty."