Coast to coast atop a Zamboni

The idea for Jimmy MacNeil's new children's book, The Red and White Zamboni Ice Machine, may have been born out of his experience driving a Zamboni across Canada in 2001, but his experience with the famous ice resurfacers goes back decades before that.

"I grew up with Zambonis always around on our family farm," MacNeil says during an interview at Brantford's Wayne Gretzky Sports Centre. "I had six sisters and a brother and we all worked for my dad fixing Zambonis at one time or another."

Today, MacNeil works as a rink operator with the City of Brantford, not far from the rural County of Brant property where he grew up. He's a familiar face at the Wayne Gretzky Sports Centre, where a big part of his job is driving a Zamboni.

MacNeil has enjoyed many milestones during his more than three-decade career, including being feted at the NHL All-Star Game and driving a Zamboni from coast to coast as part of a 2001 fundraising ride called the Goodyear Drive for Gold. Recently, he became a published author.

But a career spent working with Zambonis wasn't MacNeil's original plan when he graduated from Laurier in 1984 with a bachelor of arts degree in history. When his father fell ill with cancer, MacNeil offered to put his education on hold and help with the family business.

"My parents wanted me to become a teacher," MacNeil says. "But the Tuesday following graduation from Laurier I was working for my father and I've never looked back."

MacNeil's father recovered and went on to continue his Zamboni repair business until he passed away in 1996. After helping with the business during his father's illness, MacNeil took a different path, securing employment at an arena in St. George, Ontario, to support his young family. He later made the move to the City of Brantford. 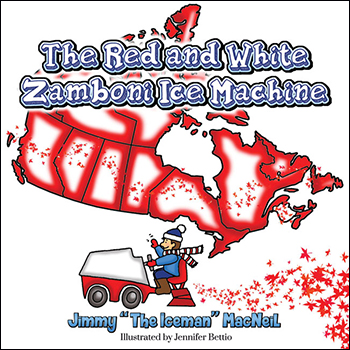 "I've made a living out of making ice, which has been incredible," MacNeil says. "I've loved it and I've been very lucky all these years to be in a job that's been a great job to have."

A career working with Zambonis has certainly afforded MacNeil unique opportunities. One of them came in 1999, when he was nominated as "Zamboni driver of the year" as part of a contest to mark the Zamboni Company's 50th anniversary. Winning wasn't a sure thing, with MacNeil's competition for the title including the likes of singer Garth Brooks and actor Bill Murray, as well as legendary Detroit Red Wings ice maker Al Sobotka.

"I used to call up and joke with the DJs at a classic rock radio station in Hamilton and they started having me do jokes on the radio," MacNeil recalls of how he was nominated in the contest. "The guys at the Zamboni plant in Brantford, where they make Zambonis, said 'let's get Jimmy in this contest' because they heard me on the radio all the time."

The nomination led to a flood of unexpected publicity.

"My whole world was turned upside down," MacNeil says. "My telephone was ringing 24-7 with people calling to find out about this contest. I ended up on Canada AM three times and was on the Mike Bullard Show. I did every news feed across Canada and I was in every newspaper. Even Lloyd Robertson on CTV News gave me a shout out. I was pretty proud of that."

To his surprise, MacNeil won the contest and was a guest of honour at NHL All-Star festivities in Toronto.

"It was amazing the way people treated me," MacNeil says. I walked into a hall they had set up for fans to get autographs and people were lined up out the door to meet me. A security guard said, 'You've got more people here than some of the players have had.'"

Following his NHL All-Star Game experience, MacNeil received a phone call from a representative of IMG Canada, which was in the process of organizing an event that aimed to raise $1 million for the Canadian Hockey Association.

"The gentleman on the phone said, 'We've been talking with the Zamboni Company and they said if we need a Zamboni driver that you're the guy to talk to," MacNeil says. "They explained to me that what they wanted to do was take a Zamboni across Canada."

It was an offer MacNeil couldn't refuse. From September 2001 until January 2002, he travelled from Newfoundland to British Columbia, stopping in 79 cities along the way, as part of the Goodyear Drive for Gold. At each stop, people paid $20.02 for a one-kilometre ride with MacNeil atop the Zamboni, which was specially fitted with extra seats. MacNeil's brother, Danny, served as his Zamboni mechanic on the journey.

"We visited cities across Canada promoting grassroots hockey and the men's and women's Olympic hockey teams that were going to Salt Lake City in 2002," MacNeil says. "Thousands of people rode the machine with me and we reached the fundraising goal. It was an amazing experience."

Following the Goodyear Drive for Gold, MacNeil put pen to paper and began working on a children's book chronicling his cross-Canada tour. After many revisions, the book, titled The Red and White Zamboni Ice Machine, was published in December 2017. Illustrated by Jennifer Bettio, it highlights some of MacNeil's most memorable moments from his Goodyear Drive for Gold journey.

"I'm kind of hoping to get this book to someone like Don Cherry, you know, give it a plug on Hockey Night in Canada," MacNeil says. "I want to see this book do what I did – go coast to coast."

After more than three decades working with Zambonis, MacNeil has plans to retire later this year. When he does, he says he'll look back fondly on what has been a very rewarding career.

"I've made making ice my passion and I've always wanted to make the perfect sheet of ice for everybody – from the little Timbits players right up to the old timers," MacNeil says. "This job just gives you a great feeling of being a part of people's lives. Even if I'm having a crappy day, it always changes when I come to work."

The Red and White Zamboni Ice Machine is available through Cavern of Dreams Publishing and The Stedman Community Bookstore on Laurier's Brantford campus.