Part of a large Golden Hawk family, Campbell followed in the footsteps of his older siblings Noni and John Campbell, who also graduated from Laurier. His youngest son, Chad Campbell, as well as his nieces and nephews Lori, Ralph, Andrea and John Spoltore also attended Laurier.

During his time at Laurier, Campbell covered sports for The Cord, participated in numerous student council activities and played goal in the Tamiae hockey league. In 1979, his contributions to Laurier Athletics were recognized when he received an honorary letterman's jacket. 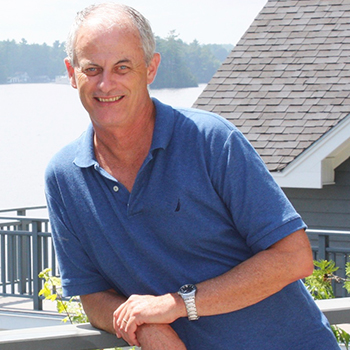 “The alumni ranks are less with Rick’s passing,” said former Laurier athletic director Rich Newbrough.  “He was a Hawk through and through.”

After graduation, Campbell began a journalism career in the sports department at the Kitchener-Waterloo Record. He went on to serve as sports editor and later editor at the Waterloo Chronicle. He became well-known in the Waterloo community and in 1982 was honoured as outstanding young citizen of the year by the Waterloo Jaycees.

Campbell and his family moved to Toronto in 1997 when he began working for Rogers Media. He served as editor of Family Practice, editor-in-chief of The Medical Post and ended his career as editorial director of Rogers Healthcare division, retiring in December 2016.

A proud Golden Hawk, Campbell served on the Laurier Athletics hall of fame selection committee and each year participated in the Fred Nichols annual golf tournament, as well as the Golden Hawk hockey program fundraising golf tournament. In 1996, he was inducted as a hall of fame member in the builder category.

Beth Thompson, Campbell’s wife of 33 years, noted that of his many accomplishments, he considered his three sons, Jordan, Drew and Chad, his greatest.