The Laurier women’s curling team claimed the Ontario University Athletics Championship in February with a win 5-3 over the Queen’s University Gaels.

The OUA championships – held in Sault Ste. Marie from February 15 to 19 – saw Laurier reel off three-straight victories over championship-calibre teams to secure the title. It was the women's curling program's sixth OUA title in the past eight years and 10th overall.

“It was an incredible feeling,” Laurier skip Kaitlin Jewer said of the victory. “This team stuck together throughout the week and rallied hard in every game we played, especially in the playoffs. We stuck together through a lot... it was the most united and connected I’ve ever felt with a team.”

Laurier defeated the 2017 national champion Laurentian Voyageurs and 2017 national silver medalists Lakehead Thunderwolves to earn a berth in the OUA final against Queen's.

As well as Jewer, Laurier's women's curling team includes lead Bridget Ribau, second Kelly Middaugh, third Riley Sandham and alternate Susanna Wright. The group competed at the U Sports national championships in Leduc, Alberta, from March 24 to 28, but failed to qualify for the medal round.

On the men's side at the OUA championships, Laurier fell 5-4 in extra ends to cross-town rivals the University of Waterloo Warriors in the quarter-finals. The Laurier men's rink was three-time Ontario champions heading into this year's OUA tournament.

Nicole Morrison made Laurier sports history in February, becoming the school's all-time leading scorer in women's basketball with a career total of 1,394 points.

Morrison surpassed Meghan McGrath’s previous record of 1,371 points during a game in Thunder Bay against the Lakehead Thunderwolves. Morrison entered the game 13 points shy of the record. She scored 10 points in regulation time and added five points in extra time to set a new record. Unfortunately, it was not enough to earn the victory, with the Golden Hawks falling 60-58 to the Thunderwolves.

A little more than a week after Morrison's record-setting game, Lakehead eliminated Laurier from the OUA playoffs, downing the Golden Hawks 74-60 in a first-round matchup. 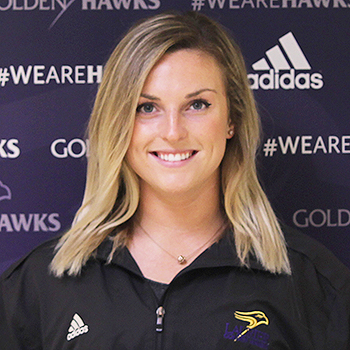 Raines was matched up against big names in Canadian swimming in the final race, including Kelsey Wog, a 200-metre breaststroke silver medalist at the 2016 World Championships.