It's a busy Friday afternoon inside Toronto's Air Canada Centre. Dozens of workers are setting up a 60-foot wide stage, tuning instruments and testing lighting, lasers and pyrotechnics for an evening performance by eclectic American musician Kid Rock. A crew is filling the arena floor with 1,200 chairs that will seat concertgoers. Merchandise is being laid out for sale in the building's concourse.

In just a few hours, 15,000 music fans will begin streaming through the doors. It's a scene that plays out each time the Air Canada Centre hosts a concert, up to 70 times a year.

While staging such a large-scale event may seem a daunting task, it's all in a day's work for Wayne Zronik (BBA '98), senior vice-president, music and live events, with Maple Leaf Sports & Entertainment (MLSE).

"Preparing for a show is truly a team effort," Zronik says during a tour of the downtown Toronto arena. "The show infrastructure needs to be built, but then a team of more than 1,000 people comes together to prepare to host between 15,000 and 20,000 fans, whether it's providing a safe and secure facility, food and beverage preparation, dealing with fan issues or housekeeping. There is an amazing amount of activity around every event."

In total, more than 300 events take place each year at MLSE venues, which include the Air Canada Centre, BMO Field and Ricoh Coliseum. In addition to the regular concerts and live entertainment events produced or hosted by LIVE, Zronik has helped stage the World Junior Hockey Championships, NBA All-Star Game, World Cup of Hockey, MLS Cup and Grey Cup.

"We have an amazing team of more than 50 full-time and thousands of part-time people that builds, sells and executes our events," Zronik says. "As leader of that group, my focus is ensuring that we have a great team in place, one that is engaged and motivated to be one of the best in the world. The Air Canada Centre is one of the busiest arenas on the planet and we pride ourselves on having one of the best teams in the business."

While live music is an integral part of MLSE's business, the company owns a roster of sports teams including the Toronto Maple Leafs, Toronto Raptors, Toronto FC and Toronto Argonauts. As part of MLSE’s executive team, Zronik works closely with the leadership of MLSE's teams to manage the Air Canada Centre calendar in an effort to host as many concerts and live entertainment events as possible.

"When you have multiple teams and one of the busiest concert calendars in the world, that requires a lot of work and diligence," he says. "It's like solving a Rubik's Cube. It’s a great problem to have, particularly when it comes to deep playoff runs for our sports teams."

A chartered accountant by trade, Zronik says his time at Laurier prepared him well for a career that's allowed him to combine the business skills he learned at university with his passion for music and live entertainment.

"Combining those skills – business acumen and finance skills – with my passion for music, which also was solidified at Laurier, is what has made me successful," Zronik says. "I played in a band with my classmates at Laurier. If I could be out on the road playing music, that would be amazing. But getting to work in this business in the capacity I do now is also amazing. I have the privilege of waking up every day and looking forward to coming to work. And Laurier formed the basis for me to do that." 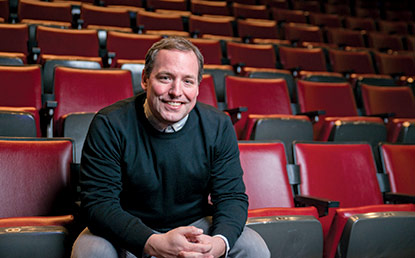 "I have the privilege of waking up every day and looking forward to coming to work. And Laurier formed the basis for me to do that."

Working in the music industry has also afforded Zronik the unique opportunity to meet some of the biggest stars in the business. He helped MLSE form a partnership with Drake that made the Canadian hip hop icon the Toronto Raptors' "global ambassador" and has had the opportunity to rub shoulders with artists including Paul McCartney, U2, Elton John, Justin Bieber and Bon Jovi.

But of the many events he's been a part of since starting in his current position with MLSE five years ago, Zronik says one series of concerts at the Air Canada Centre stands out.

"Celebrating the Tragically Hip on their final tour," Zronik says when asked about his most memorable moment. "I grew up loving their music. They were the band that opened this building 20 years ago and their final tour was both a sad and triumphant moment, both for the band and Gord Downie considering everything he was facing. We really wanted to give the three-show run a celebratory feel. And in the end it did have that feel."

Downie, the Tragically Hip's lead singer who had been battling brain cancer, passed away in October 2017, a little more than a year after the band's final cross-Canada tour.

Grounded in his Laurier education and love of live music, it was Zronik's willingness to take a risk that led to his current role. While working as a vice-president and treasurer with Alliance Films in 2008, Zronik decided to stage his own music festival in Paris, Ontario, near his home town of Brantford. The Grand Stage Music and Arts Festival featured Blue Rodeo, Matthew Good and The Sadies.

He says the show, put on with the help of family and friends – including his wife Paula, who is also a Laurier business graduate – provided "an invaluable learning experience.”

“I've never worked so hard to lose so much money,” Zronik says with a laugh. “We had to learn everything – promotion, production, booking, selling tickets – everything. All we really had was that we all loved music, but as an accountant I'd had no real experience in actually putting on a show. That's where I learned what it takes to produce a live music event and it turns out that financial loss was an investment in my future. It ultimately led to the opportunity I was afforded at MLSE to run the music and live events business.”

It's a future Zronik says he certainly didn't imagine for himself when he graduated from Laurier two decades ago – and proof that taking a risk can sometimes lead to an unexpected path.

“I do sometimes have to pinch myself,” Zronik says. “I say to my team all the time, 'you could be selling widgets, but instead you are creating memories. And that's a great privilege.'” 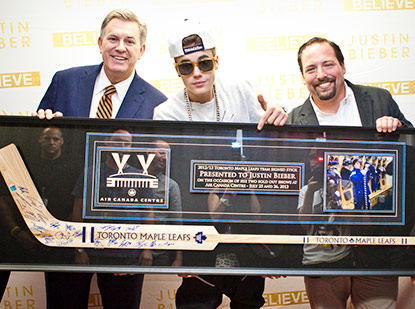