Passion for the art of filmmaking

A Q&A with Ravi Srinivasan, founder and executive director of the South Western International Film Festival

How did you get your start in the film industry and was it difficult to break in?

After completing my studies at Laurier, I enrolled in a post-graduate program in film and television at Sheridan College. One of the requirements of the program was to find an internship in film or television. This ended up being more difficult than I anticipated. I didn't know anyone in the industry and I had zero contacts. Without any significant guidance, I used the only resource I had – the Toronto International Film Festival (TIFF) program guide. I cold-called and cold-emailed several producers and production houses. You name it, I called it! After more than two dozen emails and calls, I finally received a response from producer Jennifer Jonas agreeing to meet me for coffee. Jennifer and her company New Real Films have produced 12 feature films and had their last seven premiere at TIFF. New Real agreed to take me on and I began working an unpaid internship during the day and working at the Canadian Opera Company call centre by night to pay the bills. After six months, I was able to prove myself and New Real hired me on a full-time contract and I worked on various areas of development, production and post-production.

One of your current roles is serving as a programming associate with the Toronto International Film Festival. What is it like to serve in that position at TIFF?

As programming associate for the Toronto International Film Festival, I watch 300 feature films over the span of three months. I provide notes on every film and recommend films that should play during the festival. I watch films from within the specific geographical regions of Canada, Scandinavia, Iceland, Philippines and South Asia. Once the festival lineup is locked, I work with key stakeholders and talent to guide and welcome them to Canada and the festival. Over the course of 10 straight days during the festival, I introduce films to audiences, conduct Q&As, host dinners and bring filmmakers to events. It's exhausting and a thrill all at once.

You also work as an international programming associate at the Hot Docs Canadian International Documentary Festival. Can you tell us about that?

It's relatively similar to my role at TIFF but on a smaller scale. I screen 150 documentaries over a four-month span and I work with a brilliant team of programmers to help shape the entire international film selection. We meet once a week to discuss and debate the films we've recommended. It's a really engaging, exciting (and at times frustrating) environment and one of my favourite aspects of being a programmer. Because film and art are so subjective everyone's taste is different, but we're all unquestionably passionate about the art form.

You are founder and executive director of the South Western International Film Festival – or SWIFF – a film festival based in your home town of Sarnia, Ontario. How was the idea for SWIFF born and what kinds of films does it showcase?

The idea for SWIFF was born out of opportunity and necessity. If you look across the province and the country, there's a film festival in most cities with a population of 75,000 people. Sarnia has a massive arts and culture community with a thriving theatre scene and Sarnia was home to one of the largest music festivals in the country – Bayfest. When I was growing up in Sarnia, there were no film festivals, no film workshops and no film-related courses at my high school. I felt if there was, I would have arrived with a more advanced perspective and understanding of the industry. Along with delivering the latest and greatest cinema to my home community, I wanted to provide free enrichment opportunities to high school students, taught by current industry professionals, with the goal of inspiring youth to create while educating them about career opportunities outside of what the local area has to offer.

How much work was it to get the festival off the ground?

We're currently working on our fourth edition. To be honest, it's a lot of work. A festival like TIFF has hundreds of staff, both full-time and contract. When you start something like SWIFF, which is very grassroots, you rely on a core group of dedicated individuals who you trust and who trust in your vision. I oversee every department, including development, marketing, programming and production. We continue to build new partnerships and expand our program every year. Last year saw our highest attendance to date, which was really exciting for the entire team.

You've also worked with the touring film festival Reel Canada. Can you tell us about that experience?

Reel Canada brings Canadian film to high schools and new Canadians across the country. The organization also created National Canadian Film Day, held on the third Wednesday of April every year. I've been on and off with Reel Canada for seven years and it's really the organization that armed me with the tools to succeed in establishing SWIFF. It's at Reel Canada that I learned how to communicate with various stakeholders, understand the inner workings of a film festival and hone my on-stage and on-camera interview skills.

How did your Laurier experience help prepare you for your career?

Laurier opened my mind and eyes to cinema and stories outside of American culture. Before I arrived, I was a punk kid who thought he knew everything about film, but quickly realized I had been consumed by American independent artists like Quentin Tarantino, Martin Scorsese, the Cohen Brothers and Paul Thomas Anderson. It was in Associate Professor Russell Kilbourn's class called  Brecht, Godard and the Commodification of Dissent where I began to think about film and its massive impact on how we think about race, class, gender and sexuality. The course changed my life and without a doubt was the defining moment in my pursuit of working in this industry.

What is the most memorable or rewarding experience you've had working in the film industry?

Interviewing Halle Berry was an out-of-body experience. She is a defining symbol of my generation, so that was a cool moment that gets a lot of attention from friends and family. But my defining moment in this industry was a screening and discussion that we put together at SWIFF last November. We screened the award-winning Syrian refugee documentary City of Ghosts. Following the film, two Syrian refugee women who were new residents of the community spoke about their experiences. With extreme courage and unquestionable bravery, they stood on stage and described their unbelievable experiences getting to Canada and how they are adjusting to their new lives. It was extremely valuable for the community as we inch closer to eliminating stereotypes and misconceptions that unfortunately exist. 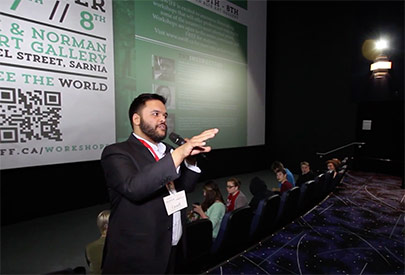 What are some of your interests outside of work?

Everything I do feels like it has something to do with work (not recommended). Currently, I'm working on a semi-autobiographical feature script that I hope to finish in 2018. I'm also developing an interview-style podcast with film critic Adam Cook called Across the Line. Outside of film-related activities, I go to a lot of concerts and music festivals, play a lot of fantasy sports with my old high school pals and try to travel at least once a year. I'm dreaming of a heritage trip to India in 2018.

How would you describe the state of the film industry in Canada and what do you see for its future?

This is a very important and difficult question. The safe answer is to say that it's thriving. Netflix recently agreed to invest $500 million in Canadian content and production in Canada is at an all-time high since 9/11. But if you ask someone on the street to name five Canadian directors, it would be a miracle if they could name one. We have a national passion for our Olympic teams, our athletes playing professionally abroad, musicians and other icons who have found success in the U.S., but for some reason Canadians have failed to rally around our artists in film and television until they leave Canada. I'm hoping I can play a small part in bringing awareness and shine a light on the stories created by us, about us.