Former Brant MPP Dave Levac (BA '76) retired from a nearly 20-year career in politics following June's provincial election in Ontario. First elected in 1999 – the same year Laurier officially opened its Brantford campus – Levac served his last two terms as Speaker of the Legislative Assembly of Ontario and in February became the longest-serving Speaker in the province's history. Levac, who will be succeeded in the Speaker's chair by another Laurier graduate, Wellington-Halton Hills MPP Ted Arnott (BA '85, BBA '86), sat down with Campus to discuss his time in politics and experience as the keeper of order at Queen's Park.

What motivated you to want to become Speaker?

I love Queen's Park. I love the tradition, I love the convention, I love the rules and regulations, and I love the process in the parliamentary system. Before I became Speaker, I used to sit at the clerk's table from time to time during question period or debates and talk with the clerks, learning the job and asking questions about what the Speaker was doing. I was inquisitive and I had such regard for the place that when it came time to decide between the possibility of being in cabinet as a member of the Liberal government or looking at potentially becoming Speaker, I wanted to try to become Speaker. I thought I could do the job well and be the referee in the legislature, so I applied by running for election and the rest is history.

Did you employ a guiding philosophy as Speaker?

Yes, to establish a process that members understood clearly, so they knew where my lines were and what I would tolerate and what I wouldn't tolerate during debate. I always aimed to be fair and judicial, but firm. And I stuck to that. I feel good that I maintained that integrity all the way through. The members didn't question the decisions I made because I was transparent and consistent.

Were there frustrating moments?

There were days that were a little more raucous than normal in the legislature. Sometimes my frustration would come out in my voice, which would get louder. I normally didn't yell, but there were times when I had to pump up the volume, which I really didn't like to do. Sometimes I would even glance at a member that was over the top and give them the 'really, are you kidding me?' look. But it all hinged on the members' behaviour. If their actions warranted a tough guy, mad Speaker, I gave that to them. If their actions warranted a calm, collected Speaker because members' actions were in order, I gave that to them. 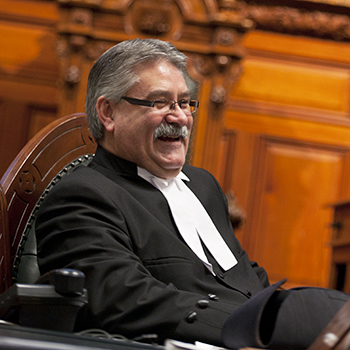 "What I'll miss the most is the people I've met and the friendships created as a result of getting out into the community."

What was the most unexpected or surprising thing about being Speaker?

The over-the-top treatment of the Speaker and the high level of respect surprised me. The people at Queen's Park certainly don't call you by your first name when you serve as Speaker. It's always 'Speaker' no matter where you are, even if you're not in uniform. I get that, but sometimes it felt extraordinarily odd. It was hard to get used to.

Is there a sense of pride in being the longest-serving Speaker in Ontario's history?

I've never really given that much consideration, but being elected to a second term as Speaker sent a message to me. It was a message that most members were satisfied with the way I was handling the job, because it's the members of the legislature who choose. Their faith in me offered a rewarding kind of feeling.

A lot of people are turned off by the often-negative tone of politics. How can we get to a more constructive level of political discourse?

By politicians not doing things that give reason for people to continue to believe what they do about politicians. If politicians act like idiots, people take that and say, 'See, I told you, those people are idiots.' More civilized and civic contact – both with each other as politicians and with the general public – would allow people to bring a neutral mentality about the condition of politics. But politicians are their own worst enemies when it comes to that. The disengagement of the public from politics is because people's natural condition is to be empathetic, understanding, straightforward, transparent and honest. They assign to political parties the same negative attributes the parties have assigned to each other.

What will you miss most about serving as an MPP?

What I'll miss the most is the people I've met and the friendships created as a result of getting out into the community and meeting the various movers and shakers and hard-working people who do fabulous work behind the scenes – the employees of local organizations, the volunteers. Most of the time it was a lesson in humility and a lesson in cooperation. It's amazing to have the gift of being able to watch it from the inside.

What would you say has been the key to your political longevity?

I think I stayed focused on what I believed the job was, which was to serve the community. I didn't stop volunteering for organizations that I volunteered for in the past, that was who I was. Always being there to support the community, I think that's the key.

You have supported the growth of Laurier's Brantford campus, which is located in Brant riding. How do you think Laurier's presence has changed Brantford during the past 20 years?

We need to speak well beyond the physical presence of Laurier to answer that question. It's a complete and total psychological shift from what Brantford thought it was to what it thinks it is now. And that's because of the hard work of many people and many partners. The city had to adopt a philosophy and offer supports, Laurier had to have an understanding of what it wanted to do with the campus and the people had to believe in the importance of post-secondary education, particularly university education. Before Laurier arrived in Brantford, our kids were leaving to attend school and a very, very low percentage were coming back. That whole psychological piece has changed. The pulling together of the partnership with Laurier, everyone rolling in the same direction and people believing that their kids had a future here – these are the biggest pieces. That said, I certainly don't want to undermine the importance of bricks and mortar because that's what has revitalized Brantford's downtown. We have a downtown that's been rejuvenated from one of the worst in Canada to one of the most unique in Canada. And now we've got the YMCA joining in the partnership, which adds to the positive belief in our community becoming stronger and better because we're unified.

"To this day, there are people who I stay in touch with that I went to Laurier with."

What are your most enduring memories from your time as a student at Laurier?

The friendships, the campus life, the community. There were 1,900 students at Laurier when I graduated. With our small class sizes, the profs became part and parcel of our education. To this day, there are people who I stay in touch with that I went to Laurier with.

What are your plans after politics?

I want to decompress, I want to work in my garage, I want to get back to doing some projects around the house. Once I get that out of the way I'm looking at the possibility of teaching a college or university course. I'm also considering working in public relations and I've been invited to consider public speaking, so there's no shortage of things to consider.

What advice would you offer people considering entering politics?​