The art of sports communications

From UFC to USA Swimming, Laurier graduate Isabelle McLemore has made her mark on some of North America's largest sports organizations

Isabelle McLemore has departed the octagon to dive into the deep end of amateur athletics.

After more than six years as a key player on the Ultimate Fighting Championship (UFC) communications team, McLemore has a new role as senior communications director with USA Swimming, continuing a high-flying career in sports administration that had its genesis in classrooms and sports fields at Laurier.

McLemore (BA '02) says she loves sports and communications for the same reason.

"Definitely the challenge – the unexpected nature of sports. You can plan to be prepared but you can never be prepared for the exact outcome,” she says, noting that getting to know new corporate “teammates” and rolling with the unpredictability of live sporting events “keeps you on your toes, keeps you excited.”

McLemore calls her story “that very typical tale” of a sports-loving kid who goes on to be a student-athlete and wants to somehow make sports her career.

“I was one of the very lucky ones able to make a career out of (sports administration). It has to be the right place, right time.” 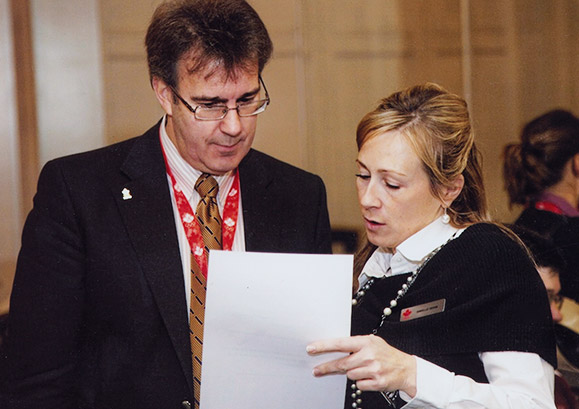 Growing up in Whitby, Ontario, McLemore was a precision figure skater and played high school soccer, volleyball and tennis. She arrived at Laurier intending to play varsity soccer, but instead found her sporting niche on the lacrosse field.

“The intense competition was very thrilling,” McLemore says. “That intimate-school feel certainly drew me to Laurier. The school was very accommodating and flexible. I really enjoyed the teachers.”

Upon graduating with a bachelor’s degree, McLemore faced a quandary: “How was I going to stay involved in sports after graduation?” Her big break – a college internship with Tennis Canada that turned into a full-time gig as media and public relations coordinator – may have had something to do with good timing. But it’s McLemore's people skills and dedication to telling athletes’ stories that have seen her make a mark on the sporting world.

“I was one of the very lucky ones able to make a career out of sports administration," she says. "It has to be right place, right time.”

The fluently bilingual McLemore left a communications management position with the Women’s Tennis Association tour to run media relations for the Canadian Olympic Committee – just in time to promote Team Canada at the 2010 Winter Games in Vancouver. One of her favourite memories is sharing in the euphoria felt across the nation when Sidney Crosby scored his golden goal in overtime of the men’s hockey final.

“That is something that I will never, ever forget,” McLemore says. “We have never seen the country so passionate about a sporting event or experience. The entire country got behind the team, supported the team. And I think there is a correlation with the team’s success.”

The proud Canadian couldn’t resist when UFC came calling. McLemore was recruited as part of a diverse team of professionals assembled in the Nevada desert to help an organization populated by ultimate fighting enthusiasts reach a broader and more mainstream audience. McLemore remembers taking part in lively brainstorming sessions where ideas flew around the table.

“It was ‘put everything on the table and see what we can make work within the industry,’” she says.

More conservative sports like tennis and swimming prefer things to be well-ordered and low-key, McLemore says, while UFC “thrives on rivalries and disruption."

"That’s how they build their brand and it’s very successful for them.”

That sense of chaos extends into the boardroom, as over six “amazing” years at UFC – the last as vice-president of corporate communications – McLemore virtually lived out of a suitcase, working at 42 events a year and being constantly on call.

It was a globe-trotting role in a sport catching on around the world. As someone who had travelled since she was small – and completed a study abroad program in Sweden while at Laurier – McLemore loved it. But over time she longed for a slower pace and better work-life balance, so she moved with her husband John and two young daughters from the dry heat of Las Vegas to the variable weather and high altitude of Colorado Springs, taking up her current position with USA Swimming.

"I liked the idea of coming back to the Olympic movement. It was a nice change."

“I liked the idea of coming back to the Olympic movement,” McLemore says. “It was a nice change.”

The former high school lifeguard now has an office in the U.S. Olympic training centre and access to an Olympic-size pool, where she plans to get reacquainted with the water when not being the public face of one of the largest sports organizations in America. USA Swimming counts among its membership 400,000 swimmers of all ages and abilities – from Olympians to toddlers taking their first flutter kicks in the shallow end.

It’s a daunting task to oversee communications and media relations for a pillar of the American amateur sporting community, but McLemore is up to the job.

“The hard part is learning the industry,” she says. “Wherever you land, you have to very quickly become an expert in that industry. You have to understand the history and where an organization has come from."

McLemore is in charge of a three-person communications team that liaises with the media, sponsors, athletes and coaches. Whether it’s working behind the scenes to help reporters tell athletes’ stories, talking with Olympians about the importance of promoting the sport, or preparing to represent USA Swimming at the 2028 Olympics in Los Angeles, she leans on her own history as an athlete to make connections.

The professional connections McLemore has made during her career allow for cross promotions like a recent USA Swimming video featuring Olympic swimmer Cody Miller visiting with UFC fighters and talking about their respective sports.

“Continuing those friendships and relationships is invaluable,” McLemore says. “You can introduce your sports to new fans...and show the elite level of your athletes as well.”

Sports communications is still a male-dominated industry, but McLemore says her opinions and contributions have never been dismissed because of her gender.

“I was never made to feel like an outsider,” she says. “Gender never really played a role in how I did business, how I was accepted on a team.”

To ensure other women can enjoy that same level of respect, McLemore is on the board of directors of Women in Sports and Events, an advocacy and mentorship group dedicated to connecting women in the industry and promoting their advancement.

“I would certainly love to see more women executives in the industry,” McLemore says. “While I’ve had a very positive experience, it doesn’t mean that there isn’t work to do. I’m very happy to be part of that and improve the industry in that respect.”

McLemore says it can be “daunting” for students to see the small percentage of sports administration graduates who find work in the industry right away, like she did after finishing her post-diploma program at Durham College. She encourages those who truly want to work in sports not to give up on their dreams, even if that means getting different professional experience first and making the move to athletics at the opportune moment.

"You leave impressions on people. Everyone can make an impact.”

“If it’s something that you’re very passionate about, don’t be discouraged,” she says. “Nurture all the relationships you make along the way, from the very beginning. Because regardless of your role at the time, you leave impressions on people. Everyone can make an impact.”