Prepared for take off

Kristin Cobbett’s extracurricular activities are quite literally out of this world.

Cobbett, a fourth-year biology and chemistry double-major student, is one of 13 undergraduate students from around the world accepted into the 2020 Advanced Academy Program at Project PoSSUM, an immersive, experiential learning opportunity for undergraduate students interested in upper-atmospheric research, bioastronautics, science communication and human space flight operations.

“Acceptance into the Project PoSSUM program puts me one step closer to realizing my dream of becoming an astronaut,” says Cobbett. 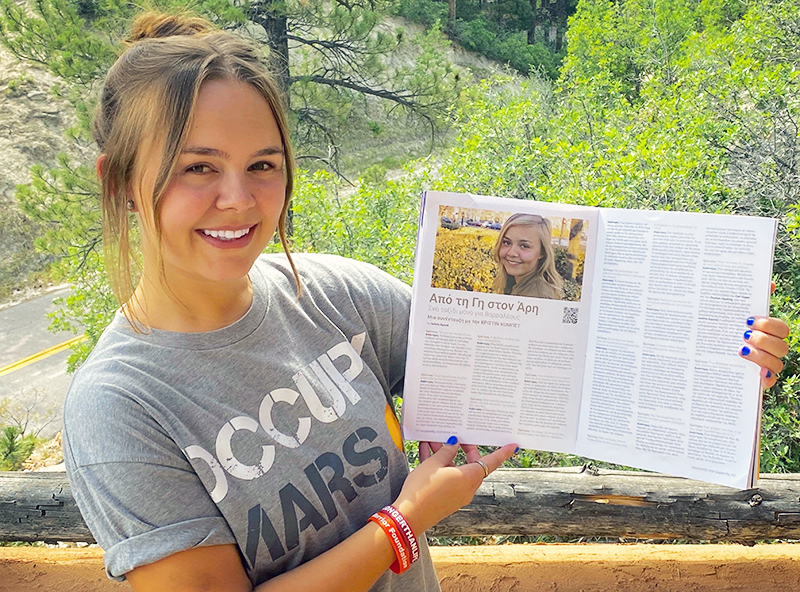 Kristin Cobbett, a fourth-year biology  and  chemistry double-major student at Laurier, is one of 13 undergraduate students from around the world  accepted into the 2020 Advanced Academy Program at Project PoSSUM.

“I’d love to  be the first person – not just woman – on Mars, as it is  the closest celestial candidate that  could  harbour  life. I’m studying biology and chemistry to better understand how life on Earth works so that I can one day contribute to how life on Mars will work.”

“I’m studying biology and chemistry to better understand how life on Earth works so that I can one day contribute to how life on Mars will work.”

As part of Project PoSSUM, an acronym for “Polar Suborbital Science in the Upper Mesosphere,” students complete three weeks of preparatory webinars before travelling to the Florida Institute of Technology, where they receive five days of academic instruction. Mission simulation, hyperbaric-altitude training, and simulated high- and micro-gravity space flight in an aerobatic aircraft are just some of the hands-on training opportunities students experience.

After completing the program, Cobbett will earn the title of “scientist-astronaut candidate” and the ability to pursue Project PoSSUM’s graduate programs, putting her  closer to  achieving her dream.

While Cobbett’s parents have long supported her dream of becoming an astronaut,  encouragement from Laurier Professor Ioannis Haranas during a first-year astronomy course boosted her confidence and resolve.

"It was Professor Haranas  who encouraged me to apply to Project PoSSUM,” says Cobbett. “From the first time we talked during office hours,  he has motivated me to  reach for the stars and forget my backup plan.  I feel like he sees my potential and that has made an impact on me.”

Cobbett has worked as Haranas’ research assistant for the past year and together they published three research papers focused on modified Newtonian dynamics. In March, Cobbett received an award of excellence from the  International Institute of Engineers and Researchers for her research paper “Post-Newtonian Logarithmic Correction Term Effects in Two-Body Dynamics” at the International Conference on Applied Physics and Mathematics, held in England.

“Kristin is on track to turn her dreams into reality,” says Haranas. “Her passion and aptitude for planetary science, combined with elite training experiences like those offered through Project PoSSUM, are preparing her for a bright and impactful future.”

Visit campusmagazine.wlu.ca to read more articles from the print edition of Laurier Campus and new alumni stories between print editions.