As volunteers and philanthropists, outstanding Wilfrid Laurier University alumni are giving back and helping shape the next generation

The joyful, challenging and invigorating years between orientation and convocation are formative for every Laurier student. They’re an opportunity to think deeply about important questions, hatch big ideas, find a purpose, and make connections that last a lifetime.

It’s no surprise many graduates remain active in the university long after they finish their degrees. They return as volunteers, philanthropists, mentors and community leaders, motivated to give back to a school that helped them find their place in the world. In this edition of Laurier Campus, we salute some of the many alumni volunteers who make a profound impact by sharing their time, resources, knowledge and wisdom — and who serve as proud ambassadors of Laurier to future generations of students.

It was almost by accident that Laurier’s current chancellor, Eileen Mercier, returned to the university in the mid-1980s as a volunteer, fundraising on behalf of the university.

At the time, she was still in the early stages of an exemplary business career that would lead to leadership roles in financial services, communications, and the paper and forest products sector – and eventually being named one of Canada’s 100 most powerful women.

After scanning personnel files for Laurier graduates, the chairman of the company she worked for asked Mercier to do some legwork for a fundraising campaign. She completed an undergraduate degree at Laurier’s predecessor, Waterloo Lutheran University. 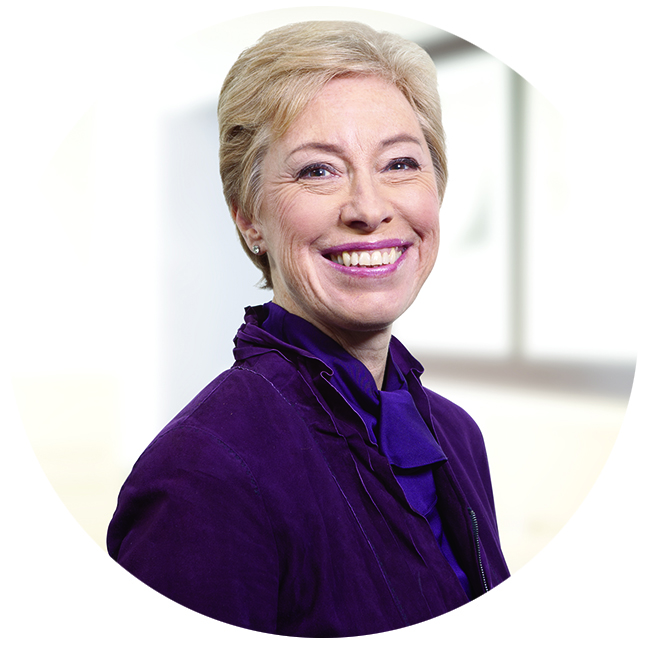 That successful fundraising project was a springboard to more than 50 years of volunteer service, culminating in Mercier’s two terms as chancellor, which began in 2016 and continue until 2024.

Mercier is also a long-time member of Laurier’s Board of Governors, serving as chair from 1988 to 1990, and served as part of the Building Canada’s Best Business School Campaign Cabinet, as well as the university’s President’s Council. She is also an informal mentor to students and has been active in the alumni choir since 2002.

“Giving back is an important part of having graduated from someplace, particularly a place like Laurier.”

“The chancellor’s job is the best job in the world,” says Mercier, who earned a bachelor’s degree in English from Waterloo Lutheran, a master’s in English from the University of Alberta, and a master of business administration degree from York University’s Schulich School of Business.

Mercier’s professional achievements include serving as chair of the board of directors of Payments Canada and the Ontario Teachers’ Pension Plan, president of Finoy Management Inc., and senior vice-president and chief financial officer of Abitibi-Price Inc.

She is among the most accomplished business leaders of her generation, a member of the Women’s Executive Network Hall of Fame and one of Laurier’s 100 Alumni of Achievement, recognized in 2011 during the university’s centennial.

“Giving back is an important part of having graduated from someplace, particularly a place like Laurier,” says Mercier. “You want others to have just as good, or a better experience than you did.” 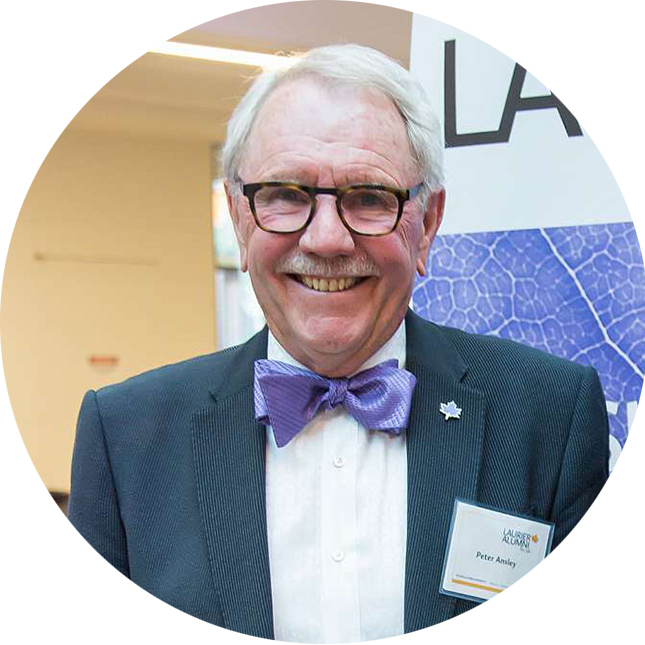 Behind the scenes of some of Laurier’s most successful fundraising campaigns and most important administrative committees, you’ll find Peter Ansley hard at work.

You’ll likely also encounter his self-effacing sense of humour, with good-natured jabs about his academic aptitude and role as a guard on the Golden Hawks men’s basketball team. Does Ansley have any degrees beyond a BA in Economics?

That modesty belies the fact that Ansley is one of the university’s most distinguished alumni and most generous philanthropists, donating significant time and resources.

Ansley served as chair of the Building Canada’s Best Business School campaign, which raised more than $45 million from nearly 2,900 donors. He also spent three terms on the university’s Board of Governors, including two terms as vice-chair. Ansley currently sits on the Laurier Development Committee and he is among the most fervent promoters of a Laurier business education.

“I have many friends from Laurier who have been successful businesspeople and we all think it’s because of Laurier,” said Ansley, an accomplished business leader in his own right and a proud Canadian Tire dealer for 46 years. “We’ve met leaders in many different fields – not only in business, but also in government. We really have been very fortunate and that’s because of Laurier.”

In 2014, Ansley worked with Laurier Athletics to establish the Peter C. Ansley scholarship for members of the men’s and women’s basketball teams.

“We really have been very fortunate and that’s because of Laurier.”

“It gives them financial support so they can concentrate on their studies and basketball,” says Ansley, noting it also eliminates the need for a part-time job. “I’m available if they want to speak with me and I have spoken to several of the players over the years. We encourage people to stay involved with the university.”

One of the many life lessons Marcia Powers-Dunlop carries with her from her days as a student is the idea that gratitude inspires generosity.

“You have to give back, you can’t just look after yourself,” she says, speaking over Zoom from her summer home in Nova Scotia. “And Laurier, when I was there, encouraged that.”

Powers-Dunlop is a legendary figure in school athletics due to her advocacy for women’s equality during the 1960s, a time when some women’s teams had to sew their own uniforms.

Her impact on university culture has been nearly constant ever since. 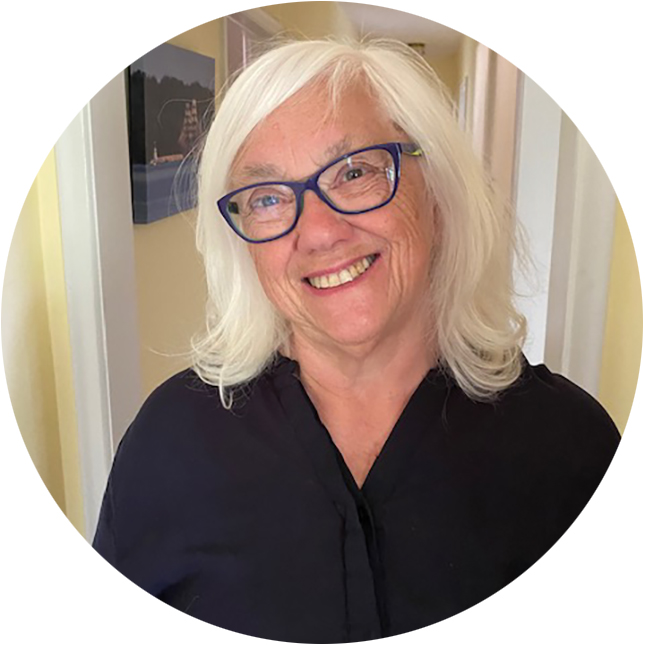 Powers-Dunlop has served as president of the Wilfrid Laurier University Alumni Association, co-chair of the 50th Homecoming Committee, and has been a generous annual donor since 1983. She also established a scholarship for athletes and managers, the Powers-Dunlop Female Athletic Award.

“I felt it was important to give back, so other women could experience what I experienced.”

“The university invested in me,” says Powers-Dunlop. “I felt it was important to give back, so other women could experience what I experienced.”

As a first-year student, Powers-Dunlop knew only a handful of peers from outside Ontario. She felt isolated at first, but embraced volunteerism and became an accomplished student leader.

Those skills served her well as an elementary and high school teacher after graduation, and later as senior manager of professional support services at the Toronto District School Board, a role from which she retired in 2020.

Though her time as a teacher was brief, Powers-Dunlop served as a social worker for more than 45 years and was a frequent attendee at Laurier events.

As a philanthropist, role model, mentor and volunteer, she continues to pay it forward.

“At Laurier I feel valued,” she says. “People take the time to say hello. They might not know who I am or where I am from, but you always feel like you still belong.” 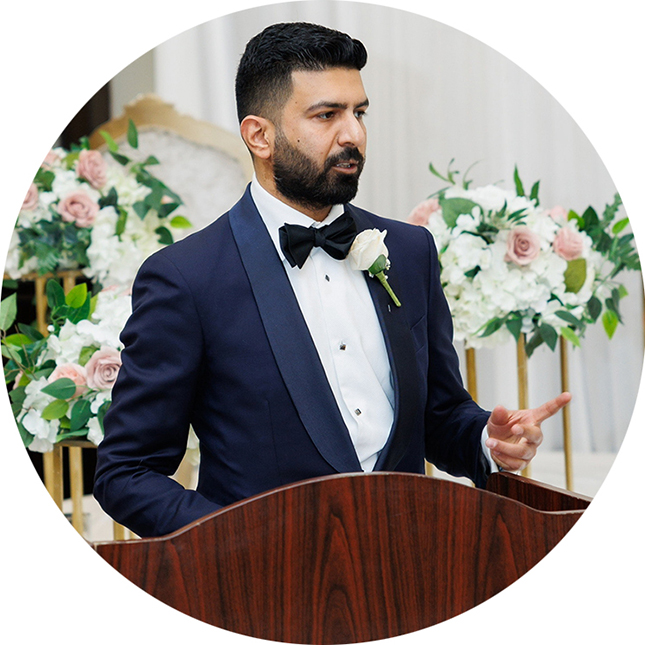 As part of the first-ever graduating class of Laurier’s Business Technology Management (BTM) program, Abid Ali made a point of being deeply involved in student life from the very start.

He was a member of the Demonstrating Excellence, Celebrating Achievement (DECA) chapter at Laurier’s Brantford campus and volunteered as an unpaid teaching assistant to connect with professors and grow his network.

“Being involved is very important to the overall university experience,” says Ali, who began his career as an analyst at Bank of America and is now manager of global technology strategy for Canada Life.

“You get what you put into it and if you really want a fully immersive experience, you have to give, you have to become involved in the broader community.”

Since graduation, Ali’s commitment to volunteerism and community service has grown. He is a member of the Wilfrid Laurier University Alumni Association board of directors, where he began leading the board’s finance committee in September 2022.

He has also been a keynote speaker at Laurier convocation and volunteers at university-sponsored events as an alumni representative.

“I make myself available,” says Ali. “I feel like supporting other students, supporting alumni and supporting the university is a personal obligation of mine.”

His small, tight-knit BTM graduating class includes friends Ali treats as family, he says, and his perspective on life changed due to the influence of key Laurier professors.

“It’s my responsibility to give back to the community that gave me so much.”

“It’s my responsibility to give back to the community that gave me so much,” he says. “And I think that’s applicable to any other graduate coming out of university – you stay connected. You can get a lot out of it just by being involved in the broader community.”

On the gridiron and off it, Hugh Lawson is one of the most prominent graduates in school history. He captained the Laurier football team to its first-ever Vanier Cup national championship in 1991, became a league all-star and played briefly in the Canadian Football League.

But since retiring from football in the mid-’90s, Lawson has made a point of giving back as a mentor, sharing wisdom he gained from juggling school, varsity sport and a part-time job before launching a successful business career.

“There are so many things in that student-athlete experience that served us well for decades to come,” says Lawson, who is now director of business development with Staples. 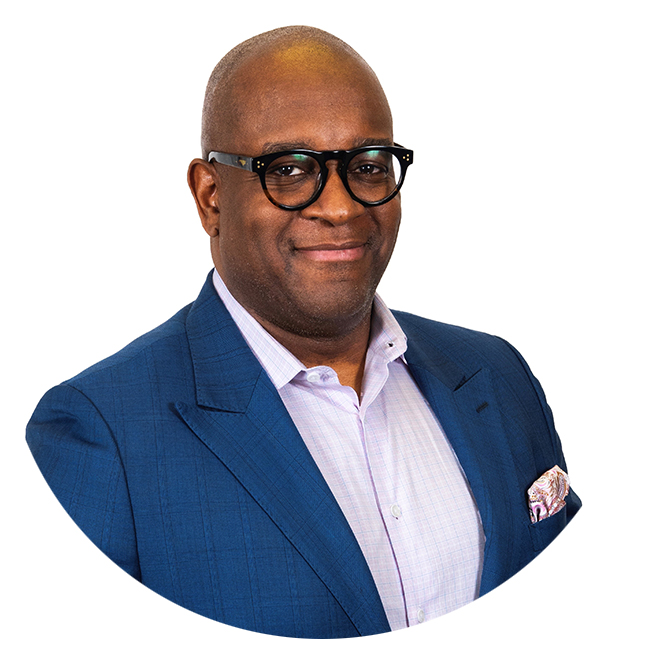 “You learn a lot: coming back from adversity, having to make mental shifts after setbacks, and then learning the importance of finishing what you started and not taking your foot off the gas.”

Lawson is a frequent panelist at Laurier events and has remained close to the football program, supporting the efforts of head coach Michael Faulds in any way he can. He’s also deeply engaged in his home community of Toronto, helping student-athletes transition into new careers through the Black Beyond Sport program.

“I learn more from the mentees than they learn from me, whether they know it or not.”

Lawson is also a supporter of the Women Entrepreneur Centre at Laurier and works as a mentor to Canadian newcomers.

“I learn more from the mentees than they learn from me, whether they know it or not,” says Lawson. “Student-athletes have this energy and zest for life. Everything is new and exciting to them and that’s infectious. It keeps the mentors relevant; it keeps them youthful.”

After completing his bachelor’s degree in Communication Studies, Lawson worked in promotional marketing and as a business executive, including more than a decade at Staples.

He also partners with his brother Mark in a charity named after his parents, Hugh Sr. and Ilene Lawson, which creates educational opportunities for young people who lack the ability to finance their studies.

“My parents had a longstanding history of volunteerism,” he says. “I was somewhat of a late bloomer, based on their influence.”

Along with discipline, time management, a strong work ethic, leadership skills and resiliency, Lawson developed a winning mindset at Laurier. He learned many valuable lessons on the way to that national title, and he’s deeply committed to give back.

“Universities, if they’re set up right, provide an equitable opportunity for people from all walks of life – gender, race, orientation – to have access to higher education,” he says. “I’ve seen a lot of people who come from very modest beginnings that I played football with, that I went to school with.

“Now they’re doctors or lawyers, or teachers or judges. They’re leaders in society. So you just want to be a part of that, to keep that momentum going. Whatever I can do to get involved with the school to make that happen, I will.”