It’s how you play the game

Teamwork has always been a part of Steve Griggs’ ethos.

As the chief executive officer of the Tampa Bay Lightning, Griggs has cultivated an inclusive culture in his six seasons as part of the National Hockey League’s modern-era southern hockey experiment.

He’s built a civic-minded brand focused on being a major player in the community and growing the sport at the grassroots level in a state that never sees ice. Griggs and company have so transformed the Lightning fan experience that ESPN ranked the organization third out of all 122 major pro sports leagues franchises in its annual “Ultimate Standings” in 2015, the fourth time in the last five years the Lightning have been ranked in the Top 10.

Nearly 25 years ago, Griggs learned about sacrifice and being a single cog in a larger machine as a fourth-line centre on the Wilfrid Laurier University men’s hockey team. Since starting hockey as a three-year-old in his hometown of Toronto, Griggs was always a top-line forward, a prolific scorer teammates turned toward to supply important goals. But upon arriving at Laurier, he found himself to be just another guy in a rink filled with talented players.

“I had to change my style,” Griggs recalls. “The teamwas so good, you find a role in order to be a part of the team.”

Griggs transformed. At Laurier, he was a tenacious grinder playing as a fourth-line centre.

“He was an agitator, a guy who’d get under your skin,” remembers former teammate and current Golden Hawks men’s hockey head coach Greg Puhalski. 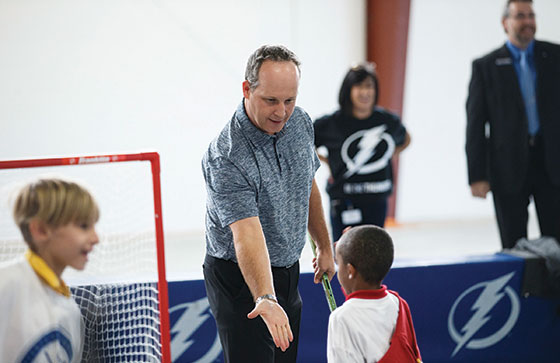 It wasn’t Griggs’ preferred position, but it got him on the ice and allowed him to be a valued contributor on some pretty good teams. True to character, Griggs bought into his new role with energy and commitment. He’s missing seven of his original teeth, which have since been replaced with implants.

“I lost one tooth in practice thanks to my teammate Steve Cote,” Griggs says. “I lost six more on a slap shot against Western.”

Griggs scored only 18 goals during his four-year career at Laurier, but he was part of the most successful run in Golden Hawks men’s hockey history.

The team won provincial championships in 1989 and 1990, Griggs’ first and second years at Laurier. It also went to the national championship in three of Griggs’ four seasons, reaching the finals in back-to-back years, falling to York 5-2 in 1989 and Moncton 2-1 in 1990.

“Crushing losses,” Griggs recalls. “But, to go that far with your teammates, you really start to understand friendships and camaraderie. A lot of those guys on that team are still my lifelong friends.” 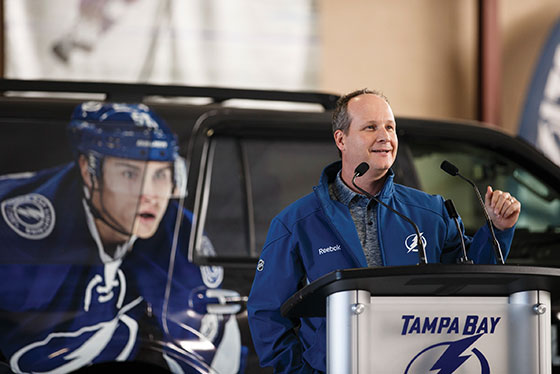 A new arena, a new direction

Today, Griggs sits at a conference table inside a second-floor office at Amelie Arena, the home of the Tampa Bay Lightning, with reminders of his passion filling the room. A framed No. 8 Laurier jersey sits on the floor resting against a wall, waiting for a spot to open. Above it hangs a black-and-white poster-size photo of Toronto Maple Leafs legendary defenceman Tim Horton playing in a game against the Montreal Canadiens. Griggs points to the opposite wall with a framed collage of the now-defunct arenas of the Original Six NHL teams.

His greatest challenge as a sports executive, and the one he credits as the “pivot point” in his career, came during the Leafs’ relocation from Maple Leaf Gardens to the Air Canada Centre. Griggs was hired for a job in sales with the NBA’s Toronto Raptors in 1994, a position earned after working relentlessly to sell tickets for the International Basketball Federation World Championships in Toronto that year.The group running the tournament also owned the rights to the expansion Raptors and brought Griggs on board.

In 1998, the Maple Leafs’ parent company bought the Raptors, and by the time the Leafs were ready to move out of their revered hockey cathedral and into a sleek, ultra-modern facility, Griggs had worked his way from inside sales to manager of sales and then director of sales at Maple Leaf Sports and Entertainment. He was put in charge of relocating all season-ticket holders from Maple Leaf Gardens to the Air Canada Centre, some fans having had their seats since the Gardens’ opening in 1931.

“Telling them they’re going to be moving to a new building to a new seat, it’s like telling somebody who’s got lakefront property they’re moving you to a different lake and you’re not going to have the same view,” Griggs says. His skill in accomplishing the monumental undertaking resulted in a move to Minnesota to become the vice-president of sales and service for the expansion NHL franchise Minnesota Wild, which opened the brand-new Xcel Energy Center and began play in 2000.

In Minnesota, Griggs worked under Tod Leiweke, now the chief operating officer of the NFL. Leiweke taught Griggs about building a strong culture, how to communicate, how to inspire. After eight years with the Wild, Griggs left to become the executive vice-president of sales and marketing for the Orlando Magic, overseeing the NBA team’s transition to the Amway Center, which opened in October 2010 and became the third arena that Griggs helped open in just 17 years in the sports industry.

Each arena holds a special meaning for Griggs. “Obviously, the one in Toronto, that’s my hometown, to be able to say you were a part of building the Air Canada Centre,” he says. “The one in Minnesota was so on-brand, and transformed the way people look at hockey arenas. And then the one in Orlando is probably one of the best buildings from an amenities standpoint and from just taking all of the best buildings from the last 10 years built into one. It was transformational for that community and transformational for that organization.”

Called up for a new challenge

One day, while working in Orlando, Griggs got a call from an unrecognized number with a Detroit area code. “Who would be calling me from Detroit?” Griggs thought.

On the other end was hockey great Steve Yzerman, one of the finest captains in professional sports history. Yzerman was given the “C” for the Detroit Red Wings just prior to the 1986-87 season, when he was only 21. He kept it for the next 19 years, retiring from the Wings in 2006 having won three Stanley Cup titles.

Griggs used to play with the Yzerman retail-model Louisville TPS hockey stick at Laurier and remembers thinking how cool it was when the team was given the Yzerman pro-model sticks when they went to the CIS championship in his senior year.

Leiweke, Griggs’ former boss, had moved on from the Wild and was now with the Lightning, under a new owner in Jeff Vinik. In May of 2010, the Lightning hired Yzerman to be their general manager.

“Tod knew how much I loved hockey from our time at the Wild,” Griggs says. “We used to play pond hockey up at his cottage in northern Wisconsin. I told Tod, ‘That’s playing a little dirty pool when you have Steve Yzerman call me.’ He was one of my idols and now I had the chance to work with him, and working with him is great because he’s such an incredible guy.”

During Griggs' six years, the lightning have:

Yzerman didn’t so much recruit Griggs to the Lightning as let him know what the organization and the new owner were all about. “I was just honest with him on what we were trying to do here and supportive of Tod and Jeff,” Yzerman recalls. “He had worked with Tod before. He knew what Tod was all about, so just to vouch forwhat we were trying to do here. We were thrilled to get [Griggs], and we’re still thrilled to have him here. He’s been a great CEO and a president prior to being CEO. He’s done a heck of a job.”

Griggs joined the organization on Aug. 31, 2010 as chief operating officer of the Lightning, the Arena Football League’s Tampa Bay Storm and Amalie Arena. Last summer, Leiweke left for the NFL and Griggs stepped into his role as the organization’s chief executive officer.

“I think at the end of the day I just love hockey,” Griggs says. “I loved working for the Magic, but hockey’s in my soul, my blood.”

Griggs’ six years in Tampa Bay have included numerous highlights, foremost among them a run to the Stanley Cup final last season that saw the Lightning win three tough playoff series over the Detroit Red Wings, Montreal Canadiens and New York Rangers before coming within two games of hoisting the cup, losing to the vaunted Chicago Blackhawks.

Puhalski, Dave Burke and Mark Lyons, former teammates of Griggs at Laurier, were able to come along for part of that magical playoff ride. “We went down to watch games three and four against the Rangers in the conference finals,” Puhalski says. “Those were real good days, playing golf in the morning and going to a playoff game at night. We’re just really happy to see that Steve has established himself as a top executive in the NHL, and we’re proud of him, especially the guys that know him well.”

"I wouldn’t be where I am today if it wasn’t for playing hockey at Laurier. It just created that sense of discipline, of hard work. It instilled the lifelong skills of teamwork and leadership and structure."

Griggs can’t recall if it was in his first or second season, but Laurier was about to play a do-or-die game against the University of Waterloo with the winner going to the CIS national championship. Puhalski was one of the Golden Hawks’ best players but was injured in the previous playoff round and couldn’t play. Griggs was picked to fill his spot and moved up to the top line with Brent Bywater and Mike Maurice.

“Having been in a different role and then stepping up, you’re nervous going into that game and you want to contribute,” says Griggs. “But I got to play with two of the best in Bywater and Maurice. They were there to say, ‘Listen, we’re going to be good here. You’re going to be fine.’”

“I was very, very lucky to play at Laurier,” says Griggs, who has two children, Maddie, 13, and Jack, 11, with his wife of 16 years, Janell. “It created an identity for you. Being able to play hockey and go to school, I look back now and I’m very appreciative to have been able to do that.

“I wouldn’t be where I am today if it wasn’t for playing hockey at Laurier. It just created that sense of discipline, of hard work. It instilled the lifelong skills of teamwork and leadership and structure.”

At every stop in both his playing and professional career, Griggs has been the consummate teammate, performing his role with vigor until called upon to step into a bigger role, the transition from old to new seamless.

“I’ve always said I’d rather be a fourth-line centre for a championship team than a first-line centre for a team that never makes the playoffs,” Griggs says. He continues to be a part of a winning team today as a top-line executive with a championship pedigree guiding the Lightning organization into the future as the franchise searches for its second Stanley Cup.