As John Morris swept his way into the history books at the 2018 Winter Games in Pyeongchang, South Korea, he continued the realization of an Olympic dream that began during his time at Laurier.

The former Golden Hawk soared to the top of the podium in February when he and partner Kaitlyn Lawes won gold medals in the inaugural Olympic mixed doubles curling competition. That history-making moment followed Morris’ gold medal performance as a member of the men’s rink at the 2010 Winter Games in Vancouver.

But long before ascending the Olympic podium to the strains of O Canada, Morris was a student-athlete dreaming of one day representing his country on the highest stage.

“In the back of my mind that was my goal," Morris recalls. "I said, ‘I’m going to continue at this game and I want to get to the Olympics one day.' Working hard and finally realizing that goal was a dream come true. To bring home a gold was something that was almost unreal, but something I'm very proud of."

Morris (BA '03) was among three Laurier graduates who were a part of the Canadian curling contingent in Pyeongchang. Paul Webster (BA '98) served as Canada’s curling team leader and head coach, while Brent Laing (BA '02) played second on the Canadian men’s rink led by skip Kevin Koe.

“I’ve known those guys forever,” says Webster, who played with and against Laing as a young curler and later coached Morris for a season at Laurier.

It was a serendipitous series of events that led Morris to qualify for his second Winter Games. He had been playing on a mixed doubles team with Rachel Homan, whose women's team won December's Canadian trials to earn a berth in Pyeongchang. Because rules state that if you win a team event to qualify for the Olympics you can no longer participate in mixed doubles, Homan was unavailable to play with Morris. Enter Lawes, who was not scheduled to play in January's mixed doubles trials.

“For me, it was a no-brainer,” Morris says. “Kaitlyn and I had played together before, she has a really good skill set and she's a competitor – she has a great drive to win. So I called her up and we clicked pretty instantly, but what we hadn’t done is curl together a lot. We got together for a quick practice in Winnipeg just before the trials and we really had to learn on the fly how to play well together.”

After winning the trials, Lawes and Morris held a two-day Olympic tuneup at the Kitchener-Waterloo Granite Club, the same rink where Morris used to play one-on-one against Laing when the two were teammates at Laurier.

“That's one of the real positive memories I have from Laurier – going down to the Granite Club with ‘Lainger’ and throwing rocks with our team," Morris says. "Club manager Jim Uhrig always made you feel like you were on top of the world.”

Webster watched with pride as Morris and Lawes received their gold medals. As chief liaison with the Canadian Olympic Committee – on top of his coaching duties – his work to arrange the logistics of flights, lodging and access to the athletes’ village for Canada’s 21-strong curling contingent started two years before the Games.

“The Olympics are what we lovingly call the five-ring circus," Webster says. "It’s so much bigger than anything else we do.” 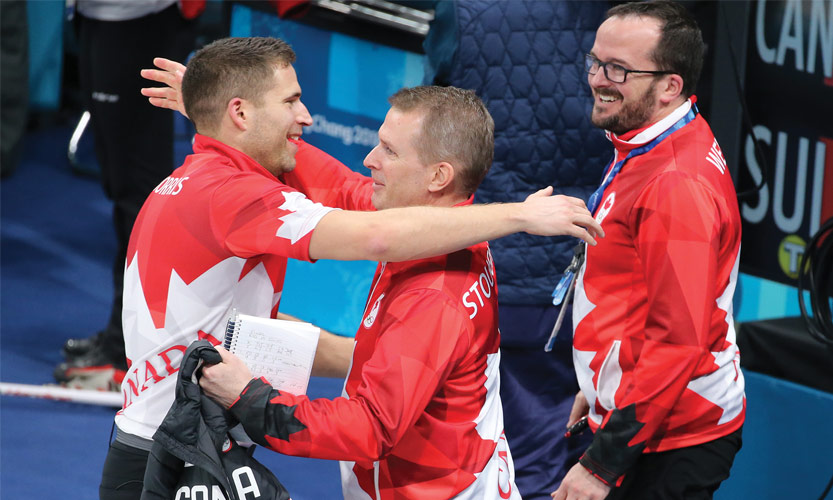 A veteran of four Olympics and 14 world championships, Webster is curling director at Calgary’s Glencoe Curling Club, where he worked with Laing and the rest of Team Koe in preparation to defend Canada's Olympic title. Prior to the Games, Webster predicted that the Canadians would be in tough against a strong field, a warning borne out by the tournament’s stunning result. Looking to win Canada’s fourth-straight Olympic gold in men's curling, Team Koe instead fell to Switzerland in the bronze-medal match.

“The competitive atmosphere around curling these days is extremely equal,” Webster says, crediting athletes’ improved training and conditioning as a contributing factor, as well as the proliferation of Canadians coaching abroad.

The men’s humbling loss came in heartbreaking contrast to the thrill Laing felt when his team qualified for the Games by winning December’s Canadian Olympic Curling Trials in Ottawa against a typically crowded field of contenders.

“Being a Canadian trying to get to the Olympics in curling, it’s super difficult and only one team gets to go," says Laing, whose wife, Jennifer Jones, won gold as a member of the Canadian women’s curling team at the 2014 Winter Games in Sochi, Russia. "Year in and year out we tend to have eight or nine of the top 10 teams in the world trying to get that one spot."

While admitting to a bit of nerves before departing for Korea, competing in his first Winter Olympics was “99.9 per cent excitement" for Laing.

"One of the best things is being a part of Team Canada – not just the guys on your curling team, but the entire Canadian team," Laing says.

Laing shares a bond with Morris that goes back to their days as junior teammates, when they twice won the World Junior Championships together. The pair also played together as Golden Hawks and were roommates for close to three years while in university.

“‘Lainger’ is probably the main reason I went to Laurier,” Morris says. “We played together in juniors when we were both in high school. He was one year ahead of me, applied to Laurier and got in. I remember talking with him when I was back in Ottawa still finishing my high school and he was saying how great the school was."

The two friends say watching Canadian curling rinks led by Mike Harris and Sandra Schmirler compete at the Nagano Winter Games in 1998 fuelled their own desire to go to the Olympics. The Pyeongchang Games, Laing says, “brought everything full circle." 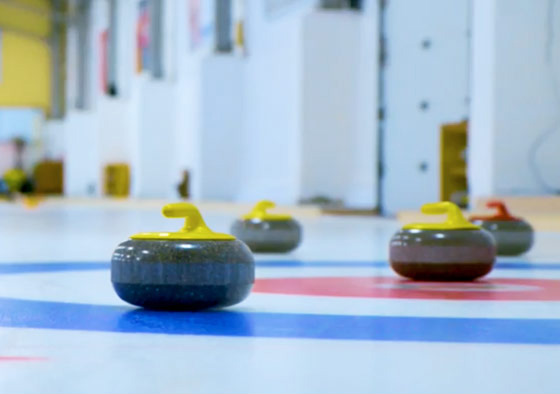 “I was curling on a junior team with John when the Olympics first became a possibility,” Laing says. “The steepest part of my learning curve in curling happened with John at my side and we first dreamed about the Olympics together. John is still a good friend and somebody who I respect a lot in the game.”

Marching into Pyeongchang Olympic Stadium alongside athletes from Canada and around the globe was a world away from the day Morris and Laing walked into director of athletics and recreation Peter Baxter’s office looking for $250 to buy sweaters for Laurier’s fledgling curling program.

“(Curling) was only an OUA (Ontario University Athletics) sport back then, so we had to scratch and claw for every penny," Morris says. "They were able to cover transportation for us so we could get to our events, but other than that there wasn’t much on the table for the curling team. A few years later they really started developing the program and it became a CIS (Canadian Interuniversity Sport, now U Sports) sport and there was more funding for it. It's good to see that it's made some good, positive strides.”

“It was a different program back then,” Laing says. “The university curling scene has drastically changed. It's much more serious and much more competitive.”

Morris says Laurier provided the perfect environment for he and Laing to pursue their studies while competing internationally on the World Curling Tour.

“We had a lot going on outside of school, but Laurier was so supportive of our endeavours and us trying to win a world championship for Canada,” Morris says. 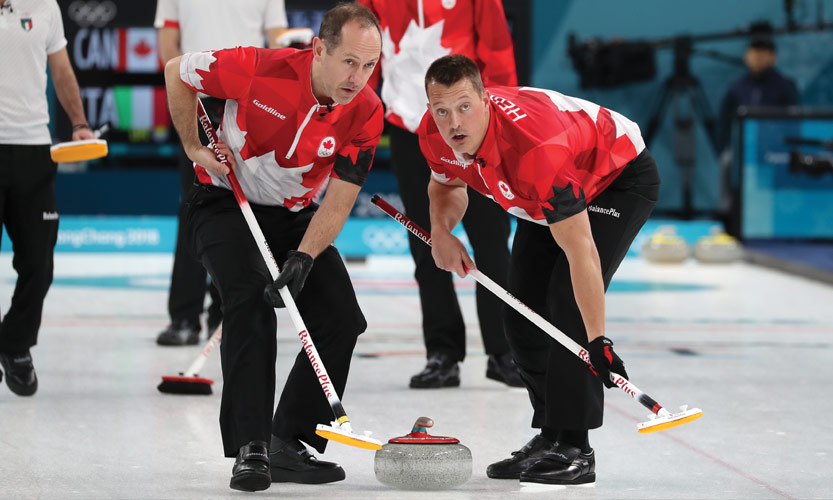 While Laurier's curling program may have changed over the years, Baxter says the school's approach to developing student-athletes remains the same.

"The student-athlete support structure and culture at Laurier allows student-athletes to excel academically and within the community while focusing on their sport," Baxter says. “It is an honour that Laurier provided a significant step on the pathway to our former student-athletes reaching their Olympic dreams. Our Laurier Olympians in Pyeongchang are role models who epitomize our university proposition of ‘inspiring lives of leadership and purpose.'”

Laing, who served as a player-coach at Laurier, says he grew as a leader both on and off the ice during his time at university.

“You learn about the difficult decisions that sometimes need to be made to put the best team on the ice and give yourself the best opportunity to win," Laing says. "Also, just the organizational aspect of it, what goes into running a team, what goes into managing all of the little things, the logistics of what it takes to put a season together.”

Playing for Laurier and on Canadian junior teams also taught Laing to work hard, be a good teammate and always find a way to contribute. He says it's those lessons that helped get him to the Olympics.

“What I always tell people is that it's impossible to dream too big," Laing says. "The Olympics has always been a huge motivator and a powerful symbol for sports and for humanity in general. You're going to need some breaks along the way and you're going to need some help, but it's about going out and finding it. You've got to work your ass off, get out there and take your lumps and learn how to play against the best if you want to be the best.”

Webster credits his Laurier experience for teaching him the importance of balancing sports and life. It was while listening to Professor Stephen Wenn lecture on the history of the Olympics that he first dreamed of what it would be like to represent his country on the international sporting stage. 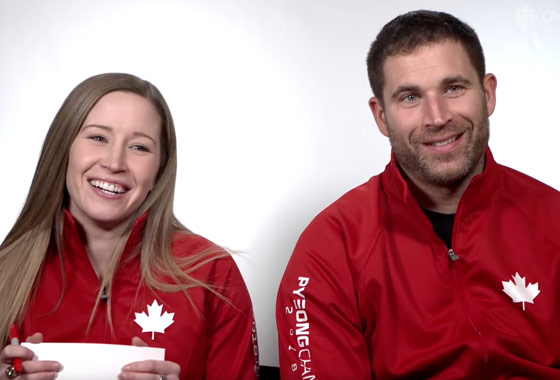 View the Youtube Video
Watch Kaitlyn Lawes and John Morris have some fun during a CBC interview.

“As a 19 or 20-year-old student listening to that, it’s really hard to connect the dots that you’ll ever attend even one Olympics,” Webster says. “I’ll never take the Olympics for granted. It’s a phenomenal opportunity.”

Over three special weeks in Pyeongchang, the three Golden Hawks shared that phenomenal opportunity together – and formed another lifelong connection.

“You create a bond that can never be broken when you go to the Olympics together,” Morris says. “It’s what makes the Games so amazing – the friendship, the spirit and the camaraderie we have as Canadians.”