Wellington-Halton Hills MPP Ted Arnott has spent nearly 30 years sitting as an elected member in the Legislative Assembly of Ontario. But, as he points out during a tour of the historic Toronto Queen’s Park building, it hasn't always been in the same seat.

When Arnott (BA '85, Business Administration diploma '86) was first elected in 1990, his Progressive Conservatives were the third party in the legislature. He moved seats for the first time soon after, becoming a member of the government following Progressive Conservative election victories in 1995 and 1999. Next came four terms on the opposition benches, when the Liberals formed consecutive governments between 2003 and 2018.

When the Progressive Conservatives returned to power in 2018, Arnott was re-elected for an eighth time. Following the vote, he was chosen by his fellow MPPs to take up perhaps the most prominent seat at Queen’s Park: that of Speaker of the Ontario legislature.

“It is a great privilege and honour to take on the role and responsibility,” says Arnott. “As Speaker, I feel an obligation to serve the house and, in turn, serve the people of Ontario.” 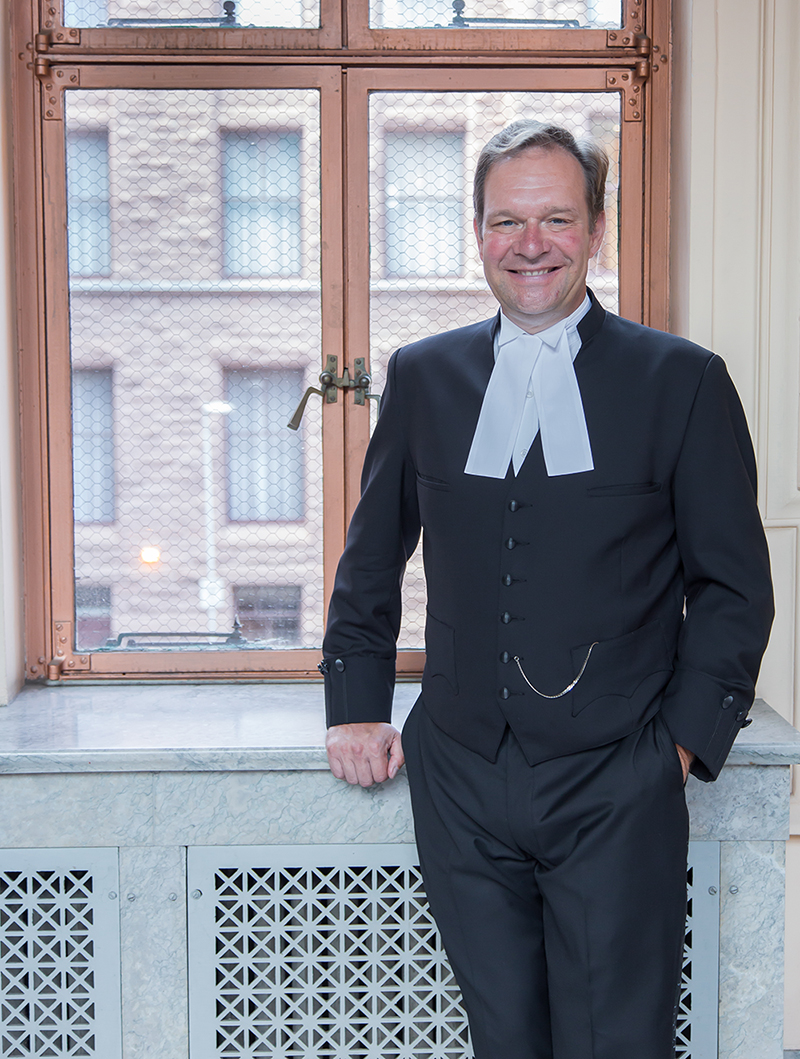 Arnott says his experience in politics has been much more than he expected when running his first provincial campaign at the age of 27.

"I remember telling my wife Lisa at one point that I had a long-term goal of someday seeking public office," recalls Arnott. "I didn’t necessarily expect it to be in the legislature. I never had an aspiration to be prime minister of Canada or premier of Ontario. I just thought that someday I'd like to run. And, I would hope, if elected, to make a meaningful contribution."

Throughout his career at Queen’s Park, Arnott has successfully championed many initiatives, including the addition of flashing green lights on volunteer firefighter vehicles and supporting “double-hatter firefighters” for rural Ontario, a practice that allows full-time firefighters to work at volunteer stations during their off hours. Arnott has also supported hospital redevelopments in his riding and a province-wide tree planting program.

He is also well-known for working with members of other parties. In 2008, Arnott and former Liberal MPP Maria Van Bommel introduced a bill to designate Aug. 1 as Emancipation Day in Ontario, which marks the day in 1834 that British Parliament abolished slavery in the British Empire. 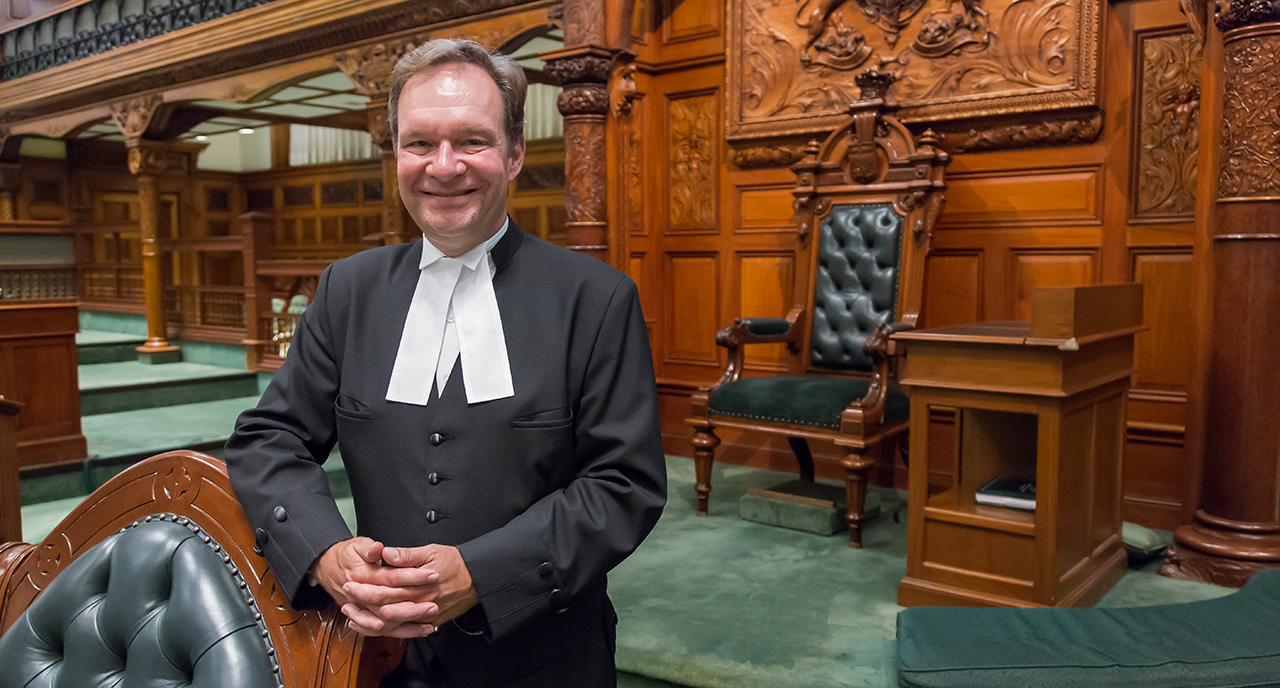 The Speaker of the Legislative Assembly serves as a neutral, non-partisan MPP who presides over the legislature's debates, enforces its rules and takes responsibility for its management. At the beginning of each provincial parliament, MPPs elect a Speaker from among their ranks.

Arnott is the second consecutive Laurier graduate to serve in the role of Speaker, following former Brant MPP Dave Levac (BA '76), who became the longest-serving Speaker in Ontario history prior to his retirement from politics in 2018.

Arnott had served as an assistant Speaker for 13 of the past 15 years. Following Levac's retirement and the 2018 election, he received encouragement from his peers in the legislature to run. Arnott was elected Speaker by his fellow MPPs on the first ballot.

He says the first few months didn't come easy. Arnott recalls that the 2018 election debate was being rehashed in the legislature seemingly every parliamentary session.

In July 2019, Arnott issued a document titled "Rules of Respect and Courtesy in the Chamber." It listed what members share in common, as well as a reminder about traditions and courtesies to uphold in the legislature.

"It is my firm belief that the respect we show each other in the house can be seen as a measure of the respect we have for the concept of parliament and indeed democracy itself," Arnott wrote in the document.

"It is my firm belief that the respect we show each other in the house can be seen as a measure of the respect we have for the concept of parliament and indeed democracy itself."

It is crucial that the Speaker demonstrates impartiality and fairness to all elected members, regardless of party affiliation. Arnott said adjusting to that mindset after so many years as a member of a party caucus took time.

"I feel that I was never the most partisan member of the Progressive Conservative caucus and over the years you realize that no one party has a monopoly on all of the good ideas," he says.

Arnott credits studying political science at Laurier for nurturing his desire to serve the public. He says Laurier was the right choice for him because it was a small school and located a short distance from his home town of Arthur, Ont. He looks back on his days at Laurier fondly and remains in contact with fellow alumni and former professors. 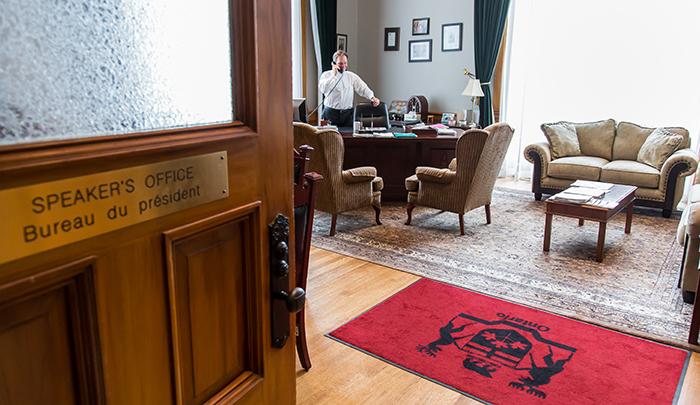 A look inside the Speaker's office at the Legislative Assembly of Ontario.

"I think that Laurier has an extraordinary community spirit,” Arnott says. “The university encourages and supports a community attitude and culture among the student population.

"When I think about my first year at Laurier, I was excited to be there and that I chose political science as a course of study. I finished at Laurier and three years later I was sitting in the legislature, so I would say what I learned at Laurier was pretty helpful."

Next year will mark Arnott’s 30th year as an MPP, making him one of the three longest-serving current members at Queen's Park, along with MPPs Jim Wilson and Gilles Bisson. He credits the support of his constituents and long-time staff members as keys to his political longevity.

"I never expected to be at Queen’s Park for an entire working lifetime," says Arnott. "Our riding has been very good to me and I hope that I've been able to accomplish what the people of the riding have expected of their MPP.

“In terms of the keys to success, I think it's a long list, but I would start with good people who help you do the job. Nobody does this job alone. It's always a community effort."