The Golden Hawks men’s basketball team has a new single-season scoring record holder. Ali Sow eclipsed Kale Harrison’s 2010-2011 mark of 466 points during the second quarter of a January game against the Waterloo Warriors.

"It’s a huge accomplishment and we are so proud of him," said Laurier head coach and manager of basketball operations Justin Serresse.

Sow finished the 2018-2019 season with a total of 639 regular-season points and added 62 for the Golden Hawks in two playoff games. Breaking the scoring record added to a lengthy list of accomplishments for Sow, a second-year guard. He also set the modern-day Laurier single-game scoring record with 44 points against Nipissing in November.

The Golden Hawks men’s basketball team enjoyed an historic season, reaching the OUA semifinals for just the third time in the past 40 years. Ranked No. 8 in Canada, Laurier's season ended with a 99-84 loss to the No. 3 Ryerson Rams in late-February.

Playing the role of underdogs, Laurier pushed the Rams to the brink of elimination in front of a near-sellout home crowd, but the effort fell short.

"The best teams, they do it for 40 minutes consistently and I think we had a couple lapses mentally and defensively, as well," said guard Ali Sow. "This experience is really going to help us down the road."

Laurier's cheerleading team won its ninth national championship in December, claiming victory at the 2018 PCA Nationals at the CAA Centre in Brampton, Ontario.

After finishing third behind Western and Guelph last year, Laurier team members decided to undertake extended training in preparation for this year's competition.

"The girls came off the mat last year hungry for more," said co-head coach Carli Thomas. "They were not happy about the third place finish and knew that if we wanted to be back in contention for the title this year, the earlier we started the more prepared we would be." 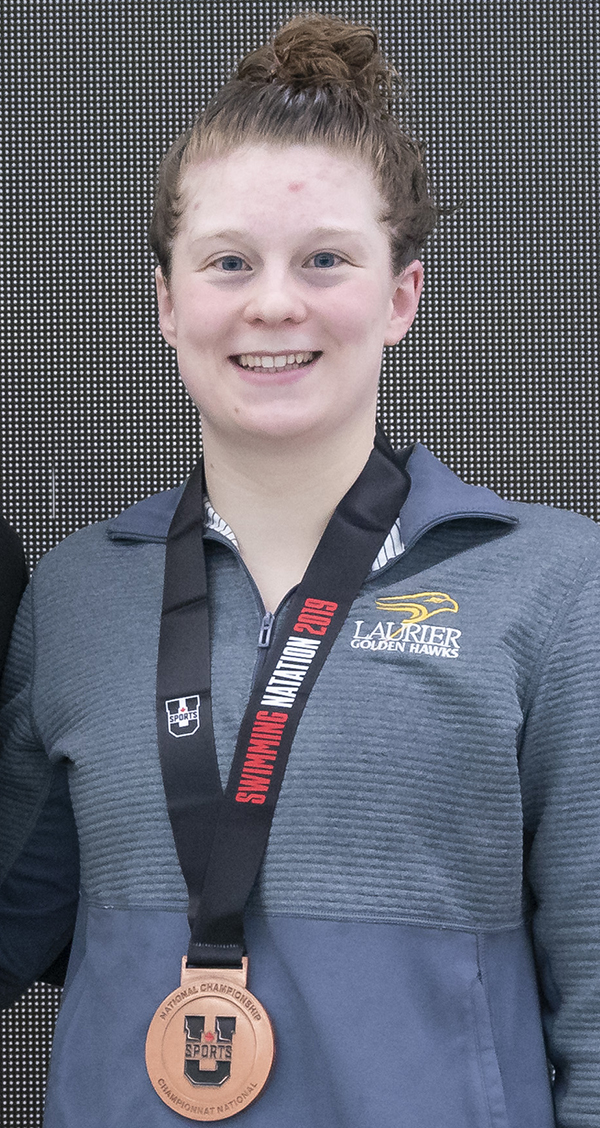 Laurier swimmer Jasmine Raines captured bronze in her signature event, the 200-metre breaststroke, at the U Sports Swimming Championships, held in Vancouver during late February.

Touching the wall in a time of 2:32.98, Raines not only secured a bronze medal, she also set a personal best.

"I’ve been waiting a while for that,” Raines said of her new personal best time. "When you’re practicing, you’re thinking 'this is the time I want' or 'this is the place I want to get.' That’s what motivates me to keep working hard and reach those goals."

The Golden Hawks men’s rugby team made history in November, capturing its first-ever OUA medal. Laurier claimed bronze with a 17-6 victory over the Waterloo Warriors at University Stadium.

The Golden Hawks, playing for bronze for the second consecutive season, received an MVP-calibre performance from fifth-year player Andrew Quattrin, who scored two second half tries, including the game winner with 10 minutes to play.

"This is gold for us," Quattrin said following the win. "It’s not gold in the OUA, but it’s gold for us."

Rookie outfielder Matthew Komonen hit a walk-off single in the bottom of the 10th inning to propel the Golden Hawks men’s baseball team to its second OUA Championship.

Laurier defeated the University of Toronto Varsity Blues 4-3 at Ajax Sportsplex in late October to claim the title.

"It’s an unreal experience being at the bottom of the pile after your teammates mob you," Komonen said following the victory. "I couldn’t really see anything and busted my lip open, but it was fun and something I’ll always remember."

The game was a rematch of the 2017 OUA championship, which saw the Varsity Blues emerge victorious.

Hanlon was the first Laurier player to be selected for the Canadian team since Jean-Michel Rizk in 2011. A third-year arts major, Hanlon recorded eight goals and seven assists for Laurier during the past season.

Held every two years, the FISU Winter Universiade is the largest university winter multi-sport competition in the world. 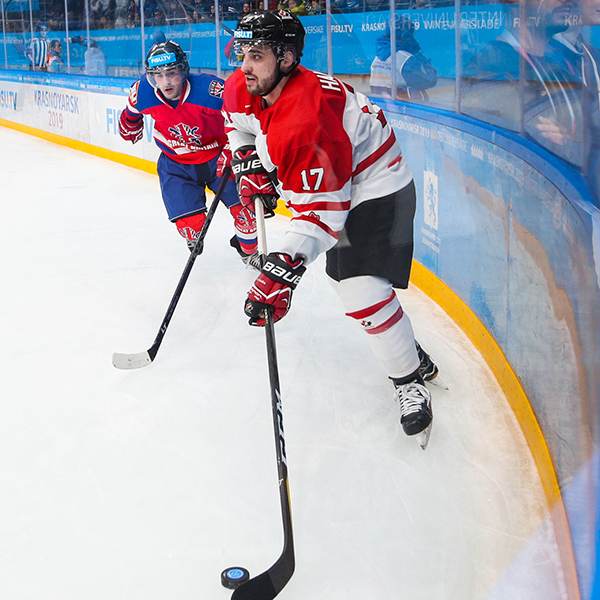 The Hawks finished the championship with a team total of 63-over par 631. The Ottawa Gee-Gees claimed gold and Western earned silver. Laurier's women's team finished seventh at the competition.

Laurier played a tightly contested championship game against the Queen's Gaels, but fell 11-6 on a cold afternoon in Peterborough. It was the best finish for Laurier's women's lacrosse team in eight seasons.

RELATED STORIES
Preparing for pro – and beyond
Features | Winter 2017