Laurier defeated the Dalhousie Tigers 8-5 in the tournament final, which saw the Golden Hawks use a three-point second end and single steals in the third and fourth ends to put pressure on the Tigers. With last rock in the 10th end, skip Matt Hall cleared a single Tigers stone to secure the victory.

"I think that is all you want, that opportunity to have last rock in your hand with the chance to win the game,” Hall said following the victory.

"We knew that if we played up to our potential, we were better than anyone we were going to play against."

“We relied on our experience and just kind of stayed level headed," said Willsey. "We knew that if we played up to our potential, we were better than anyone we were going to play against."

As the 2020 champions, the Golden Hawks will represent Team Canada at the 2021 FISU Winter Universaide in Switzerland next January. The Laurier men's curling team last won the national title in 2016.

Laurier's women’s curling team finished the OUA championship in style, winning the bronze medal with a convincing 8-1 victory over the Guelph Gryphons.

After falling short in a bid to reach the gold medal game, the Hawks rebounded in impressive fashion to secure the medal and qualify for the U Sports championships. 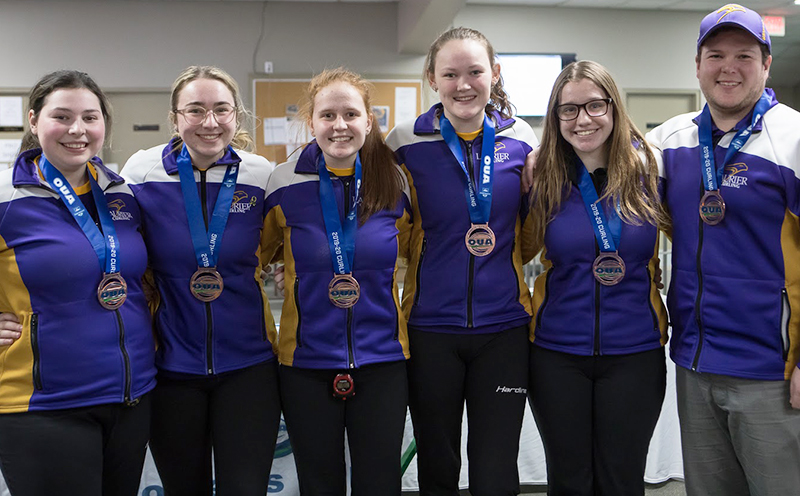 “This is very exciting,” rookie skip Isabelle Ladouceur said following the win. “It’s honestly just an honour to place on the podium.”

At the U Sports national championships in March, the women's team was eliminated following round robin play, finishing with a 2-5 record. 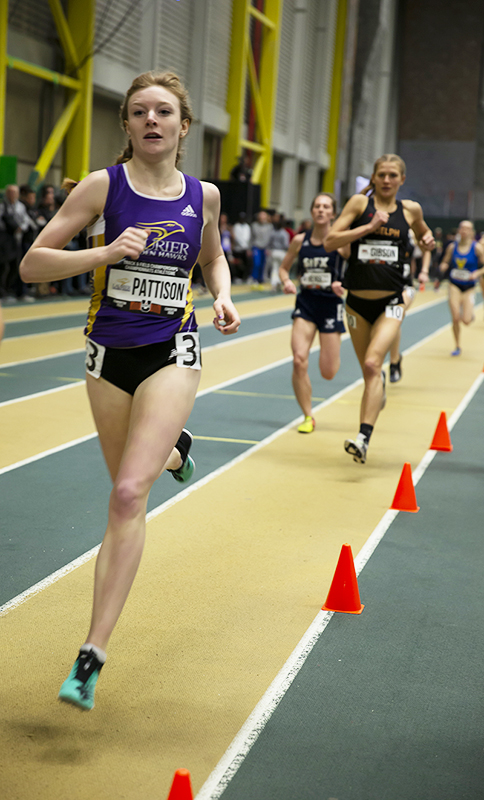 Sydney Pattison finished third in the 1,500-metre race at the U Sports indoor track championships.

U Sports track medals a first for Laurier

Laurie won silver in the 3,000-metre race. Heading into the final lap in fifth, she made a push on the back half of the track to move into third and then second place with the finish line in sight. Laurie finished with a time of 9:38.17, a new personal best.

Pattison finished third in the 1,500-metre race to claim the bronze medal. She completed the race in a personal-best time of 4:24.79 seconds, finishing close behind second-place finisher Kate Current of Western University, who posted a time of 4:24.27.

For the second time in as many years, the Golden Hawks men’s baseball team captured the OUA Championship, defeating the Carleton Ravens 12-1 to win the Ontario title. It was the program’s third provincial title in the past seven seasons.

“They’re all a little bit different for sure,” head coach Scott Ballantyne said following the victory. “We graduated a lot of players last year, key parts of our team that we knew were going to be very hard to replace. People thought we would take a step backward because of those departures but, internally, we knew that we had the people to fill the roles.”

The victory represented the 75th provincial championship in the history of Laurier varsity sports.

The Golden Hawks men’s golf team won the OUA championship for the first time in its 35-year history, earning the victory last fall at Angus Glen Golf Club in Markham, Ont. Laurier finished the tournament at 21-over par 597, five shots ahead of the University of Ottawa Gee-Gees.

Leading the way for the Golden Hawks was Jaron Brown. The Communications Studies major capped an incredible season by winning the Len Shore Trophy as the 2019 OUA individual gold medalist. Brown shot a two-day total of one-over par 145. 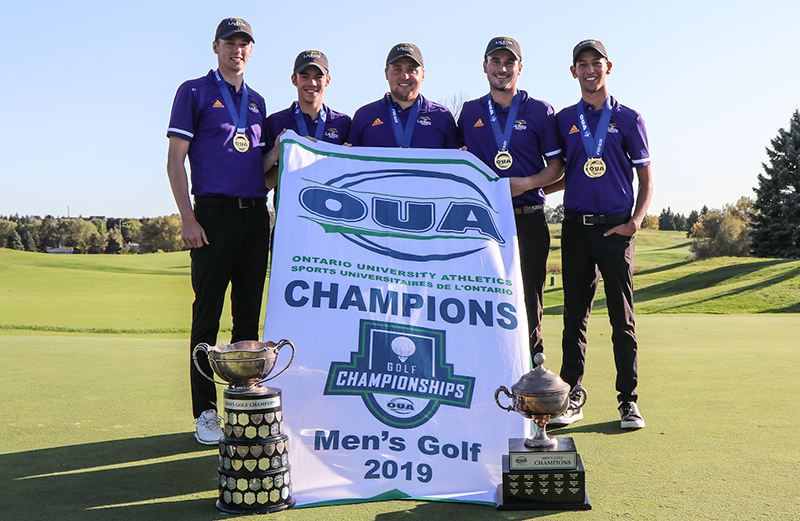 The Laurier men’s golf team captured the OUA championship for the first time in school history.

“It feels amazing,” said Brown. “The key to winning was just perseverance - not getting upset if you hit a bad shot and just grinding it out until the very last hole.”

In the women’s event, Laurier put together its best team finish since 2015, capturing fifth overall with a score of 98-over par 530. Sam Zulian led the way for the Golden Hawks, finishing 13th at 27-over par 171. 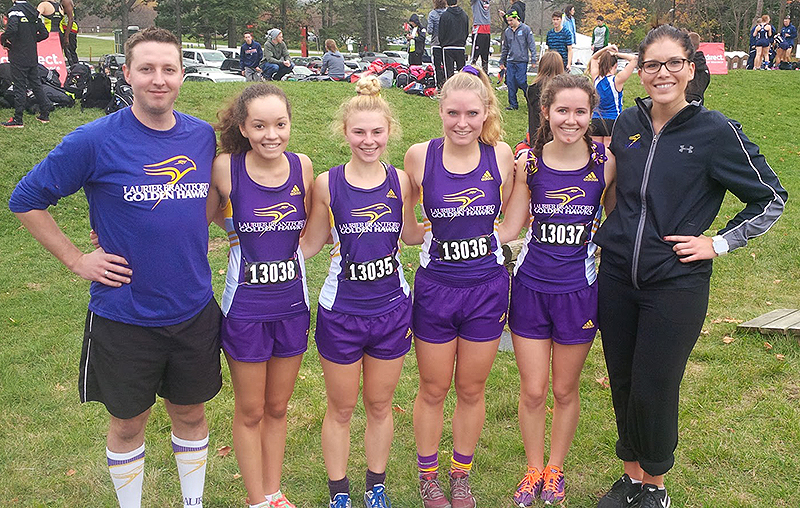 After winning gold at provincials, Laurier was ranked fourth in the country heading into the event.

“I could not be prouder of these girls,” said coach Cory Currie. “They trained so hard for this moment and it showed.”

The women’s team was led by Vanessa Brown, who finished the six-kilometre course in sixth place with a time of 26:13. Following close behind was Faith Nieson in 17th place, Kara Hughes in 24th place, Chiara Carinci in 41st place and Jessa Braun in 50th place.

For the first time in more than a decade, Laurier's men’s hockey team cracked the U Sports Top 10 national rankings. The team was ranked seventh in the country in February.

Laurier earned the ranking after an impressive run of play that saw it post a 9-2-1 record over a span of 12 games. Laurier was last ranked in the Top 10 in January 2010.

The team had its season come to an end with a hard-fought loss to the Guelph Gryphons in a first-round, best-of-three playoff series.

Laurier's men's basketball team was ousted from the OUA playoffs in heartbreaking fashion, losing a semifinal contest to Western 104-103. In a game that will be remembered as a classic, Western’s Nikola Farkic hit a three-point shot with just two seconds remaining in overtime to give Western the victory.

Galloway played four seasons for the Golden Hawks between 2000 and 2003 and was a member of Laurier's football coaching staff during the team's Vanier Cup win in 2005.

He returns to Laurier following stints with the St. Mary’s Huskies, Guelph Gryphons and McMaster Marauders.

“This is a once-in-a-lifetime opportunity and I am so excited and honoured to be able to come back to my alma mater and give back,” said Galloway. 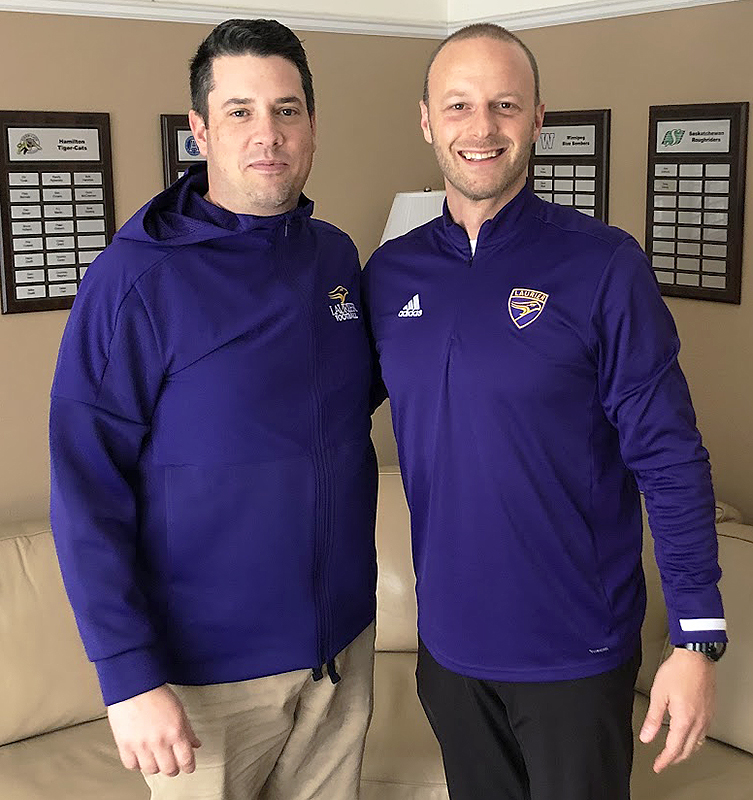 The Golden Hawks cheerleading team captured the bronze medal at the 2019 Power Cheerleading Athletics (PCA) Nationals, held in December at the CAA Centre in Brampton, Ontario.

The Hawks narrowly missed defending their national championship in a close battle with the Guelph Gryphons, who took home gold, and the Western Mustangs, who won silver. Laurier finished just 3.3 points behind the Gryphons for top spot.